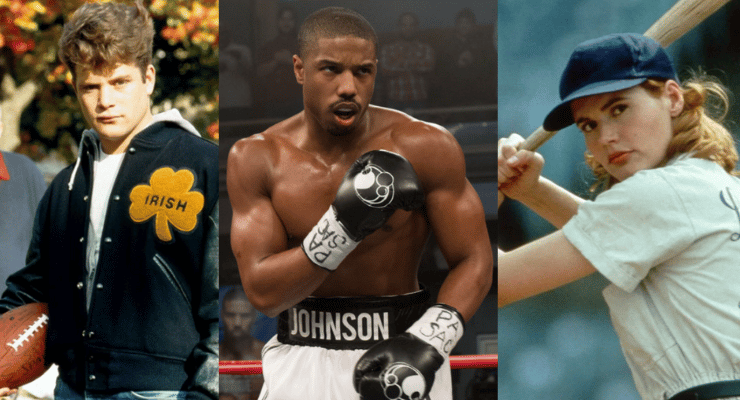 Whether or not you’re athletic, most people can agree that sports movies can be pretty entertaining, from race tracks and ball fields to courts and rinks. For die-hard sports fans and causal viewers alike, the following sports movies stand out from the rest for their inspirational underdogs, dramatic true stories, and hard-earned victories.

From basketball dream teams to Olympic medalists, here are some of cinema’s most popular sports films.

Considered to be one of the greatest pairs in the history of filmmaking, Martin Scorsese and Robert DeNiro’s partnership made Raging Bull reach new heights. The film follows the story of the boxer Jake La Mata, who gradually climbs up the boxing ranks and becomes the boxer to beat. This is a deeply layered story and Jake La Mota shows to the audience that ultimately we are fighting against ourselves.

With every great sports film there’s an even greater comeback story. This defines the movie, Miracle. Based on a true story, the film takes place in the 80s during the Cold War when the U.S. Olympic hockey team faced the Soviets to win the gold medal. Coached by Herb Brooks (Kurt Russell), the U.S. wins the game in epic fashion and reinstalls hope in the nation during turbulent times.

With a carefully selected cast and an authentic story, Lords of Dogtown introduces us to a world that was once foreign. The movie shines a light on the surf and skateboarding subculture that emerged in California during the 70’s. More specifically, the film is told through the eyes of the Zephyr skate team members who overcame many obstacles in order to raise the level of both sports. It is thanks to them that these sports are where they are now a days.

The film is told through the point of view of a Matt Buckner (Elijah Wood) who moves to London after being kicked out of Harvard. He is then introduced to the violent underworld of the soccer thugs also known as hooligans. This film is very authentic and it will make you want to know more sport and culture around it.

Winner of one Academy Award, I, Tonya is one of the most extraordinary figure skating films ever made. It recounts the story of Tonya Harding as she rises amongst the ranks of the U.S. Figure Skating Championships. But to make things harder, her husband’s persistes on intervening in her career until he ends up tarnishing it. This is a tragic tale that teaches us to be aware of who with associate ourselves with.

Even though this might sound like a typical detective story, it’s not. Point Break, has a widely entertaining plot filled with thrills and spills. The plot follows a FBI agent who decides to go undercover to infiltrate a gang of extreme sports athletes who he suspects are behind a string of bank robberies. Even though the film doesn’t have much depth, it certainly doesn’t lack epic action scenes.

White Men Can’t Jump stars Wesley Snipes and Woody Harrelson, possibly the oddest, but greatest black and white duo ever. Foes at first, the duo later joins forces to win money on a street basketball tournament. Even though this film misses the chance to touch on racial commentary, it still provides a fresh take on the sports genre.

Million Dollar Baby is about a female boxer who trains hard to become a professional. At first sight, this movie may seem like another boxing movie, but it manages to avoid all cliches. With a phenomenal cast and world renowned actor/director, Clint Eastwood, this film delivers deep heartfelt scenes and highly emotional performances. It also teaches us the quality of modesty.

Before the famous Oscar ceremony slap, Will Smith was known for his acting accomplishments. His outstanding performance in the biopic, Ali is one of his greatest accomplishments yet. This biopic explores the triumphs and controversies of the legendary boxer, Muhammad Ali. Ali, caters an emotional pull that compelled audiences and critics worldwide and the film stand the test of time.

Nominated for 5 Oscars, Foxcatcher is an unusual biopic, packed with drama and self destructive behaviors. This biopic takes place in 1988 Olympic games, as the multi millionaire coach John du Pont (Steve Carell) trains the U.S wrestling team for the competition. This film reveals to us how a sense of entitlement can be detrimental to an individual.

With a phenomenal ensamble of actors, A Legue of Their Own is set during the WWII and follows a team o female professional baseball players who struggle to succeed. Set in a unique moment in history, with A-list actors casted and no special effects, this film went on to make $105.1M in profit worldwide. This proves that successful films can also be “simple”.