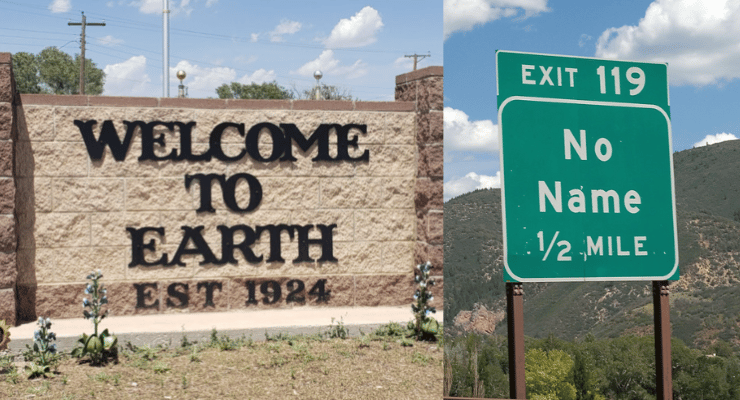 There’s no denying that the U.S. is a unique place to live, with 50 one-of-a-kind states each with their own style and flair. While you may have heard of places like San Francisco, Chicago, and Miami, there are some cities and towns across America known not for their history or culture, but for their unusual names.

We’ve scoured all 50 states, and came back with some of the weirdest, unusual, and sometimes questionable town names on the map!

At first sight, it seems like the 45,000 residents of this town are having somewhat of an identity crises. Are they Alaskan or Unalaskian? The name was established by the early Russian fur traders. These traders named the town Ounalashka and after that it became known as Unalaska. Perhaps, the name got lost in translation. That would be only reasonable explanation.

Center of the World, Ohio

Some people thought that the world was the center of the Universe. In Ohio, people live in the Center of the World. Far from being in the center of the world, the founder, Randall Wilmot gave it this name because he wanted the town to be the center for commerce. It was a visionary marketing move, but the execution definitely failed. At least Randall tried.

Who would like to visit Hell for a day? Hell, Michigan is one estate over from the Center of the World, in Ohio. Who knew that they could be so close. The town got named in 1841 by George Reeves. Reeves was asked what should the town be called, he replied saying “…you can name it Hell for all I care.” His response was literally taken into consideration and now Hell, Michigan is the only “hell on earth.”

A little confidence boost would do good for this town. Poverty, Kentucky was named by William Short. Short was a local physician who hated his pretentious neighbors. As an act of insult to his fellow neighbors, Short decided to name the town Poverty. His neighbors will never be able to hide the fact that they were born in Poverty. It worked for Short.

If you are looking to move out of Poverty, Kentucky and start a new life. I would recommend moving to Success, Missouri. The town got its official name in 1880. The founders of the community named it Success in order to promote a mineral spa. As I marketing strategy, the founders claimed that bathing in these springs would bring them success. And so it did.

We would assume that there are no wrongs in Correct, Indiana. But there certainly was. Originally, the town was suppose to be called Comet after the great Comet of 1881, but a misunderstanding in the U.S postal office resulted on it being called Correct. Just like that the name stuck. That is probably the only mistake that has ever happened in this town.

With only 148 residents, Why, Arizona is located right next to the Mexican border. So why move there? If you like Mexican food and quietness, then this is the town for you. The name came about from an intersection of two major highways that form a Y-intersection. Originally, it was going to be named “Y”, but that name was legally too short , so the town founders decided to take an existential approach and name it Why.

When in in doubt of where to visit why not stop by Whynot, North Carolina? Located in the heart of North Carolina, Whynot remained nameless for a brief moment. The name got established due to an indecision of the founders. No one could decide on the name of the town and the debate went on for days. After a series of why not this, why not that, Whynot became the official name of the town.

Superior, Wyoming is a town forgotten by time. It was once a town of 3,000 residents who were lured by the coal mine industry. There’s not much information of how the name of this town came to be. But we can assume that the rich mining history might’ve influenced its name. Now, with only a few hundred residents, Superior, Wyoming is not quite as superior as it was. Maybe it’s time to rename it “Ego Check.”

When looking to live a life off the grid, Nothing, Arizona would warmly welcome you. Nothing, Arizona is an uninhabited ghost town in the middle of nowhere. There’s even a possibility that there are more rattle snakes than people in this town. It is said that the town got named by drunk travelers. When visiting, drinking could be something to do in this town.

Ordering a Pepsi around these parts could be risky. But in reality this county’s name has nothing to do with the soda. In fact, the county was founded in 1889 by Richard Coke and it was named after him. Interestingly, Coke County has been entirely “dry” throughout its history and only in 2005 a law was passed allowing the consumption of beer and wine. It is a fact that the residents arrived late to the party.

We could assume that it’s all fine in Okay, Oklahoma. Never too good, never too bad. But this town’s name is deceiving. The name Okay was adopted in 1919 after the “O.K Trucks” which was a brand of oil tankers built there by the Oklahoma Manufacturing Company. Okay is a town with 600 residents and school teachers are allowed to carry guns. This might be one way to guarantee school safety.

If you like your potatoes baked then Fries, Virginia is not the place for you. With a name like this we could assume that there’s an abundance of potatoes in the region. But no. The town is actually pronounced “Freeze” and it was named after colonel Francis Fries. Fries was a cotton mill owner who helped the town establish itself. Forget the potatoes, there’s not much of that around there.

Being punctual in this town is of extreme importance so don’t arrive late to the Sunday mass. Jokes aside, Early, Iowa is named after the local settler Carr Early. Carr was a generous man who even donated part of his land to the town. Generosity and punctuality are extremely significant here. Better early than late.

California is not only about sun shine and pristine beaches. Rough and Ready, California is mining town named after a mining company. With a population of 1,581, Rough and Ready is a town that managed to become its own republic in the 1850s. Even though its independence only lasted three weeks, residents still celebrate it every year. If you don’t like the beach then this might be the town for you.

Climax, Michigan is another small town with an odd name. The story behind its name is even stranger. In 1834, Daniel B. Eldred, son of the Judge Caleb Eldred, climbed a tree to look around and claimed “this caps the climax of everything we saw.” Without any further a do, this town became known as Climax. That’s very anti-climatic.

When traveling through Oklahoma, Hooker might be the worth the visit. In Hooker, it is said that the community proudly stands by the fact that are are many job opportunities for residents and non residents. But don’t get deceived by the name. These job opportunities are not what we think. Even their own inhabitants say Hooker is “a location, not a vocation.” We would certainly hope for that.

It’s intuitive to think that this town is named after the famous musical genre. But in reality, Funk, Nebraska is named after a Civil War veteran, P.C. Funk. In fact, Funk is a town born from the ashes. The town survived through three serious fires and somehow managed to remain alive during the Depression. Life was not easy in funk-town.

With fewer than 200 residents, No Name, Colorado has a small but loyal community. In fact, these loyal residents made sure that the town became known as No Name. But this town is not as boring as its name. Visitors can check out the No Name creek, hike the No Name trial and drive through the No Name tunnel. Once visiting this town, you will most likely meet some fellow No Namers who probably do have names.

Earth, Texas was established by William E. Halsell in 1924. The original name he wanted was already taken. So, the townspeople sent some name suggestions and Earth was decided to be the best of them all. Was it the best they could come up with? But one thing is for sure. These were the first people to inhabit Earth.