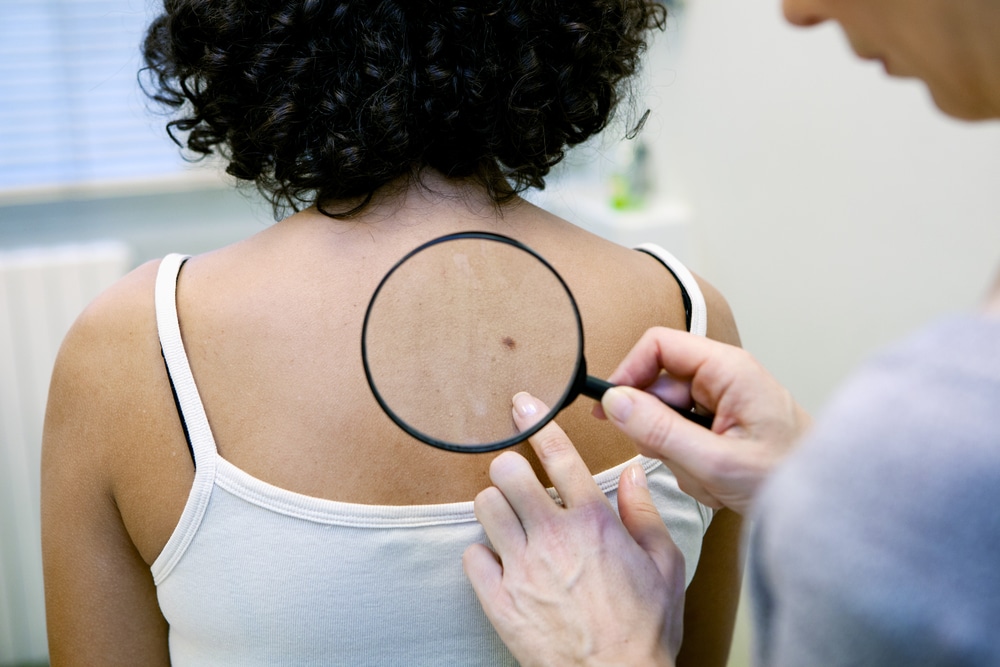 According to SkinCancer.org, “Between 40 and 50 percent of Americans who live to age 65 will have either basal cell carcinoma or squamous cell carcinoma at least once.”

Skin cancer is the most common type of skin cancer and the most preventable and treatable. In fact, if one catches the cancer early enough, they have a 98 percent chance of stopping the skin cancer in its tracks.

Causes of Skin Cancer, a.k.a. Melanoma

Although UV rays from the sun are the number one leading cause of melanoma, there are many other causes too.

Even though not many studies have been done on it, some suspect that certain topical creams, especially those loaded with chemicals, can further accelerate skin cancer. Exposure to corrosive chemicals, such as strong acids and bases, can definitely lead to skin cancer as well. Always wear proper protection when dealing with dangerous chemicals.

Symptoms and Stages of Skin Cancer

Which symptoms present themselves vary based on the type of skin cancer and stage it progresses to.

This is the earliest stage of skin cancer, which features dry, scaly-like spots. Areas of the body that are exposed to the sun the most—such as the neck, hands, forearms, head and shoulders—are likely to feature these spots. Fair-skinned people are more likely to experience this type of skin cancer. In most cases, AK is followed by squamous cell carcinoma if not treated.

Basal cell carcinoma is the most common form of skin cancer, featuring flesh-like bumps over the individual’s skin. It may also be accompanied by pinkish skin patches. This type of cancer is, more often than not, caused by the sun. Fortunately, this cancer does not grow quickly, rarely spreading to other parts of the body.

Like the previous two types of cancers, this one is commonly found on sun-exposed areas of the skin. Bumps and ulcers will first heal then reopen. It’s the second most common type of skin cancer and will move into very deep areas of the skin if not treated.

When people talk about skin cancer, they’re most likely referring to Melanoma. Unfortunately, it’s also the most serious form of skin cancer. It is so named because of the fact that it produces excess melanin in the skin, resembling dark spots. Those with lots of moles are the most likely to receive this form of cancer.

Luckily, there are numerous forms of treatment for skin cancer. Better yet, skin cancer, regardless of the type, is the easiest form of cancer to treat, so there’s no need to panic whatsoever if one is diagnosed with it. That said, it’s always important to seek treatment right away.

For less serious types of skin cancer, treatments include:

At one time, melanoma use to be a death sentence because there were no treatments at the time. However, that is surely not the case today. A new combination treatment of Tafinlar and Mekinist, for example, is newly approved and showing much promise.

The best method to treat skin cancer, however, is to prevent it in the first place. According to the CDC, some great measures for mitigating risk of this type of cancer is to reduce exposure to the sun. This can mean:

Remember: even if one happens to get skin cancer, it can be easily treated. It’s light years away from the death sentence that it use to be.