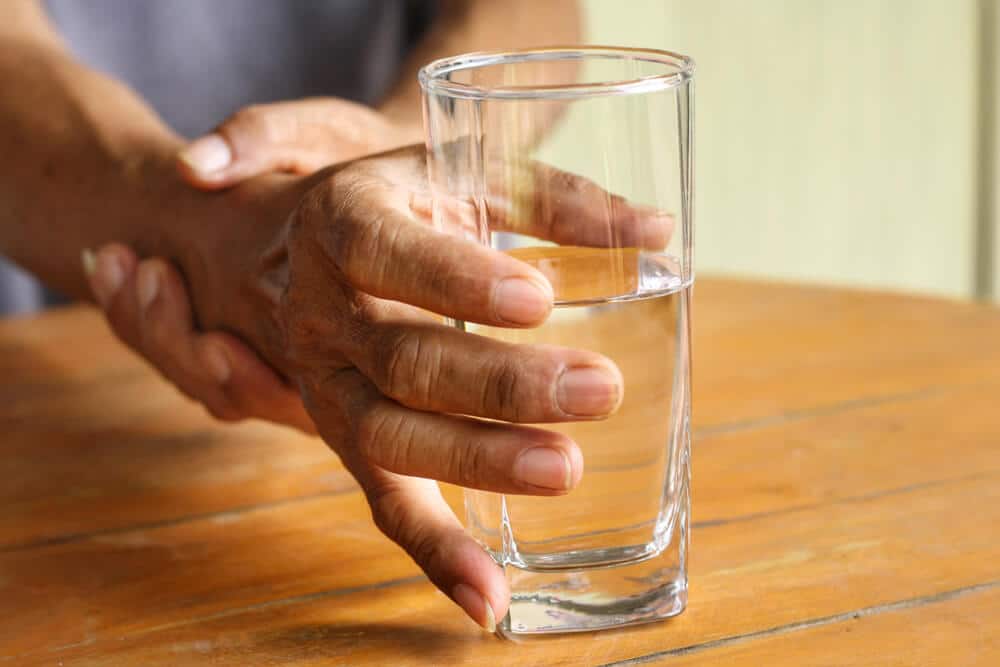 Unfortunately, there is no cure for Parkinson’s disease, but early diagnosis and treatment can slow its progression. That’s why we’ve outlined 13 common symptoms in this slideshow to increase awareness about this condition.

Tremors are one of the first signs of Parkinson’s disease. There are a number of different neurological and musculoskeletal (muscles, bones, ligaments, tendons, and nerves) issues that can lead to tremors.

For most Parkinson’s patients, tremors begin in one leg, foot, or hand. As time goes on, they spread to the other side of the body. Some people even experience a resting tremor in their chin, jaw, tongue, or mouth.

The following symptom is totally opposite of tremors, though…

Rigidity and postural instability are two other first signs of Parkinson’s. The rigidity comes first, and the stiffness then leads to posture warping. People with Parkinson’s often experience a reduced range of motion and rigidness in their torso or limbs.

Some people might present with postural instability when they’re first diagnosed, but rigidity is more common. It’s not until the disease progresses that serious balance issues come into play.

When someone is able to move, they might notice they aren’t as nimble as they once were…

Bradykinesia is a Greek word that means “slow movement.” In addition to being a symptom of Parkinson’s disease, bradykinesia is also seen in other movement disorders and neurological illnesses related to Parkinson’s.

The symptom is characterized by both a slowness of the body’s movement and a mask-like facial expression with a reduced ability to emote (facial masking, or hypomimia). The eyes tend to blink less often than an average person’s.

Some ways this symptom manifest include:

Unfortunately, postural instability and bradykinesia can combine to create the following…

Postural instability and bradykinesia both combine to make walking difficult, which can also lead to:

As Parkinson’s progresses, it’s common for walking to become more difficult. Mobility aids can improve a person’s quality of life, and some people may transition to full-time use of a wheelchair in later stages. Unfortunately, the following symptom can make using mobility aids difficult…

Dystonia is a type of movement disorder that causes the muscles to involuntarily move in ways that can be unnatural or painful. When a person has dystonia, parts of their body move repetitively and twist in uncontrollable ways. Various body parts, like limbs, the neck, and the eyes can be affected.

Of course, PD can change the way someone talks, too…

It’s common for individuals with Parkinson’s to experience changes in their voices. This means the volume and speed at which they talk, as well as a difficulty in expressing emotions, can occur. In some cases, people with Parkinson’s might stutter.

Many people are unaware of how common pain is in Parkinson’s disease, but it’s actually one of the single most common symptoms, and fatigue can partner with it. There are four types of PD pain:

With Parkinson’s disease, even cognitive issues are common…

Parkinson’s causes a number of neurological symptoms that disrupt cognitive functioning, emotional processing, and overall mental health. Three of the most common psychological issues experienced by Parkinson’s patients are depression, anxiety, and psychosis.

Unfortunately, the following PD symptom can worsen the entire condition…

Many people with Parkinson’s experience sleep disturbances like insomnia and vivid dreams, both of which can cause a loss of sleep. While vivid dreams tend to be medication side effects, depression and physical pain can also result in lack of sleep.

Someone with PD can expect changes to their smell and vision, too…

4. Changes in Sense of Smell and Vision

Sensory changes are a common neurological component of Parkinson’s. People might experience a combination of changes to their senses of smell and sight, which can result in less frequentblinking. Eye problems due to diminished blinking are also common and can lead to vision loss.

Additionally, a reduced ability to detect and differentiate between odors is called hyposmia, while a total loss of the sense of smell is called anosmia.

Parkinson’s can cause a slowed down digestive system, due to overall slowed down body movement. This can even result in the bladder slowing down, which can lead to:

These issues are certainly difficult to deal with for the individual. Unfortunately, the following sign of PD can also be difficult not just on the sufferer, but also their loved ones…

2. Changes in Cognition and Personality

In addition to psychological issues, neurological symptoms, including cognitive changes and personality alterations, are common.

When cognitive issues present in the disease’s early stages, it may be a sign of a related disease that isn’t Parkinson’s, but something like Lewy body dementia. For example, it may be difficult for PD sufferers to find words, think critically, make logical judgment calls, complete trains of thought, multitask, focus, or stay organized.

The following is one of the most common symptoms of PD. It’s also one of the least talked-about signs of the disease…

Though sexual dysfunction and other sexual issues are extremely widespread among the Parkinson’s population, this symptom isn’t often talked about. Some problems can include decreased or increased libido, or impotence.

So, what should someone who suspects that they or a loved one has this disease know?…

Parkinson’s disease is a progressive neurological illness that presents with a range of motor and non-motor symptoms. By understanding how different symptoms present, people can seek treatment for themselves or a loved one who may have the condition.

Early diagnosis and treatment is key to retaining motor function and improving the overall prognosis.

Those with multiple symptoms of Parkinson’s disease, particularly the unusual neurological or motor symptoms, should speak to a doctor. Even if the underlying cause isn’t PD, neurological and musculoskeletal issues should be diagnosed as soon as possible, as they can be related to other serious conditions.