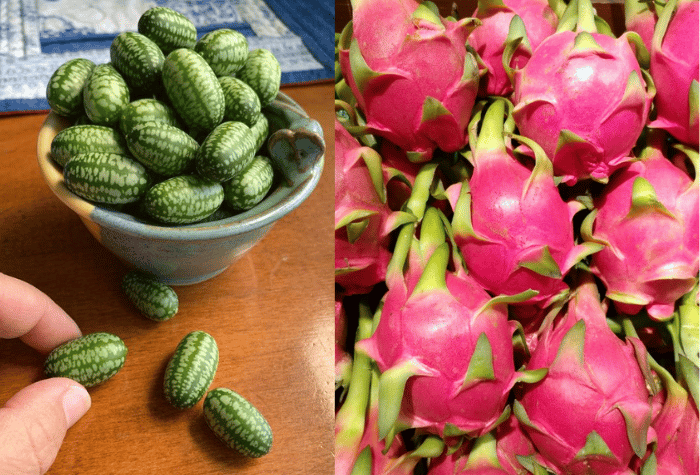 When asked to name a number of fruits and veggies, most Americans will answer with US staples such as apples, carrots, and potatoes. But did you know that there are a host of weird-looking, delicious foods around the world that most people haven’t seen?

Though some of them may look otherworldly, these are all grown right here on planet Earth. From strangely-shaped citrus to uncommon greens, here are just a few unique-looking fruits and veggies grown in various corners of the globe.

Durian was discovered on Borneo Island and is quite popular in Southeast Asian countries.

We don’t know why this fruit is termed the “king of fruits” but what we know is that the durian fruit is an odd sight. It is unusually large with spiky skin. Durian is unpopular for its strong odor which is very offensive to many people.

But if you manage to get past its strong smell, durian is said to taste like a creamy custard blend of whipped banana and vanilla cream, with a hint of onion.

The jabuticaba fruit may look like a plum but it tastes like a grape. Native to the people of Brazil, jabuticaba grows directly on the trunks and branches of the Jabuticaba tree.

This yummy fruit can be eaten raw, made into jelly, or can be turned into wine!

This strange-looking food is, however, native to Africa and Asia. It looks similar to a sweet potato which has purple skin and white insides. Don’t be deterred by the weird sight because it is said to have a sweet nutty flavor and can be used in different dishes.

A veggie that looks like broccoli and cauliflower is not an everyday sight. This veggie may look inedible as a result of its bright green fractal skin but it is very popular in its native Italy.
It looks more like cauliflower but tastes just like broccoli.

The kiwano melon looks like a spiky melon on the outside, and a cucumber on the inside. It’s no wonder it tastes like cucumber with a hint of banana when ripe. The kiwano melon or horned melon (as it’s popularly called,) originated from Southern Africa but you can find it anywhere in the world.

A fruit that looks like an exploding planet on the inside, is definitely making this list of weird fruits.

For all its strange looks, hala fruit tastes like sugarcane (yummy!)

This fruit is native to Southeast Asia, the Pacific Islands, and Eastern Australia.

The ackee fruit is both weird and dangerous. For one, it looks like a peach with spider eyes and can be risky when eaten the wrong way.

It must not be eaten before it’s ripe and only yellow arili should be eaten. Anything else will result in a coma or worse- death. Ackee is native to West Africa and is also found in Jamaica.

If you think this fruit does not look edible, you are not alone. But once you get past the weird spiky hairs, you will find out it tastes like a delicious blend of grape and pear.  This bizarre-looking fruit is native to Southeast Asian countries.

The Lychee is one appealing-looking fruit. Grown in China, it has red skin with a grape-like interior. It has a heavenly taste of strawberry or pear with a whiff of citrus!

Akebi is a delicious fruit native to northern Japan.

While you can eat the white insides which taste like a mix of coconut, pear, and melon. The purple pod can also be cooked and eaten as a vegetable.

Whoever made the statement “looks can be deceiving”, had the salak fruit in mind.

Salak may have snake-like skin and is prickly like a cactus but it is one of the most delicious fruits on this list.

Salak or snake fruit (courtesy of the scaly skin) is native to Indonesia. This juicy fruit tastes like a sweet-sour blend of honey and pineapple.

This succulent fruit is appropriately nicknamed star fruit thanks to its star-like shape. Native to Southeast Asia, Carambola has a delightful flavor that tastes like a mix of ripe pear, green grape, and orange.

We don’t know if Buddha’s hands looked like that but we can’t deny that this is a weird-looking fruit with an equally weird name.

It was discovered in India and found its way to China through Buddhist monks.

Oddly, Buddha’s hand fruit is quite sweet and has a lemon-like flavor (without the bitter aftertaste) and can be consumed raw or used in cocktails.

If you love chocolate but are gluten intolerant, the Black Sapote is a natural alternative for you. It tastes just like chocolate pudding hence the nickname ” chocolate fruit pudding”. This tropical fruit is native to Mexico, Central America, and Colombia.

Custard apple, sugar apple, or sweet-sop, you just got to have a taste of this yummy fruit. It is said to taste like a creamy custard with a mix of sweet tropical fruits, mint, and cinnamon. This strange fruit is of Mexican origin.

Thanks to social media, this small purple fruit has gained quite the notoriety as a superfood. It is loved in Southeast Asia for its flavorful mix of peach, strawberry, lychee, and pineapple.

Ugli fruit looks like an indecisive orange. It makes sense when you find out it is a cross between an orange and a grapefruit or an orange and a tangerine. It is quite juicy accompanied by sweetness with a bitter aftertaste.

And it is also called Jamaican tangelo due to its Jamaican origin.

This fruit might look like a spiky flower and may stain everything it touches, but it has been doing wonders in Central America, the native home.

So while it is not an edible fruit, the brightly colored pulp is used as a food colorant and commercial dye.

One look at dragon fruit will get you craving for a taste. Thankfully, dragon fruit (also called pitaya) is as juicy as it looks and is a good source of vitamin C. Native to Central and South America, dragon fruit is said to taste like a nice blend of pear and kiwi, with its tiny black seeds giving it a strawberry-like texture.

Also called the cucumelon and the Mexican sour cucumber, the mouse melon looks like an adorable, bite-size watermelon. Native to Mexico and Central America, this tiny fruit is actually in the cucumber family, and tastes like a slightly sour cucumber with a hint of lime.