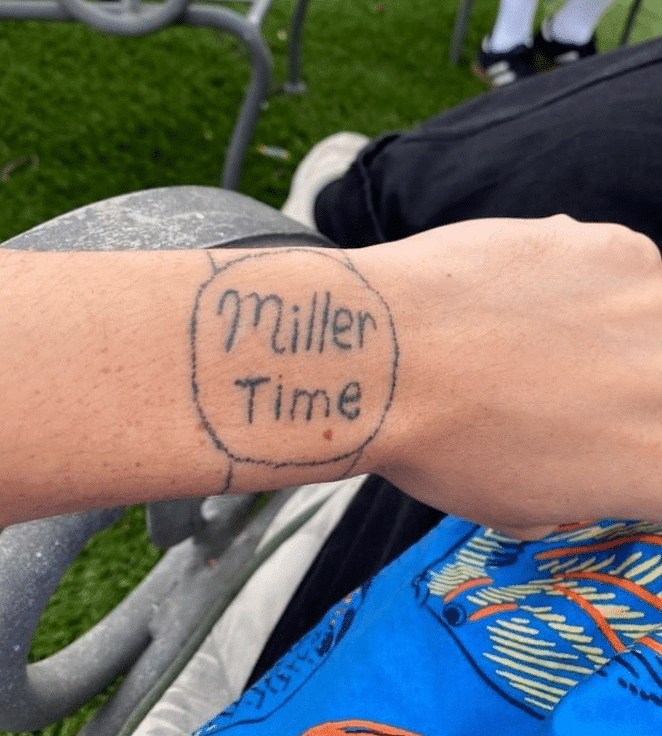 The greatest thing about tattoos is when you get a good one, it will last a lifetime. The worst thing about them is a bad one can ruin things for you – relationships, street cred, appearance. So, hopefully, after reading this article, you start seeing why it’s important to think about what you put on your body.

We have scoured the Internet and here are 20 of the worst tattoos that we have seen.

One of the reasons people get tattoos is to flex something. It could be their pain tolerance, their money (because good tattoos are expensive), or their bravery. In this one, it could be the bravery…to live your life with those on your face.

Nike check as one eyebrow and the Jordan jump as the other? Weird flex but okay.

A common thing to get as a tattoo is a line of a song. In this case, the person is trying to get “It’s my life” by Bon Jovi but somewhere along the way, the artist forgot how to write it down and put “It’s is my life” instead.

Someone give this person a biology lesson! However, compared to the others on this list, at least they got to use “you’re” the right way. The lack of apostrophes is pretty disturbing too.

What’s worse than not wearing a face mask during a pandemic? It’s getting one tattooed on your face to avoid it! Yep, this person did it. Not only is it poorly executed but the idea is just mind-blowing (in all the wrong ways).

It’s a bird, it’s a dragon, it’s a really bad tattoo! Besides not knowing what creature it is that is tattooed on this person’s back, the feathers (we’re presuming) is just badly drawn diamond. Eeesh!

Getting your partner’s name tattooed on any part of your body is insane as it is but covering it up with a stamp that says void just makes it worse! This is why we mentioned earlier that thinking about what you’re tattooing on your body is a crucial part of the process.

Here are three things that are wrong with this tattoo: the linework, the idea, and those nails! Haven’t you heard of a pedicure?

Aww, what a cute cat! Wait, is your belly button supposed to be the…? The cat is drawn well but the placing is bad. Even if one puts it to be funny, it’s just wrong.

Sometimes, people are just better off drawing on themselves with a marker since it fades. It says “God forgieves I don’t” – the spelling and lack of punctuation marks are enough to make it a regretful tattoo but the lettering is something out of this world.

Again with the punctuation marks! “Karmas” could be a name in some part of the world but we don’t think she’s referring to a person. Stop DIY-ing your tattoos, people!

Wow, the face of the tattoo is done well but the rest of it is looking rushed. This is probably how people feel on the start of something and then lose their thought during the process.

America is the land of freedom and justice but this tattoo gives the country a bad name. That’s ‘Murica, y’all!

Since when did the spelling for streets change? Kids, take note. This is why education is important and should be seen as a privilege because it avoids things like this!

No matter where you look at it from, it’s bad. The thing that makes it even worse is having the inspiration flashed beside it.

Jesus may look different in other cultures but which Jesus is this? It looks like someone who is confused and is wearing a hairnet.

Oh, look. It’s another one of those copied ones! One side is made by a legit tattoo artist while the other one was made in a garage. Which one, you say? It shouldn’t be that hard to tell!

In tattoo competitions, pinup tattoos seem to be the hardest to do but whoever did this didn’t look like they even tried.

It’s a hybrid tattoo – a hybrid between a badly drawn woman and an even worse lion (or whatever that is). The woman’s lashes remind me of that doll from a Nickelodeon show called Rugrats!

If that what the Miller Time looks like, it’s probably too early for anyone. This is a classic style that garage tattoo artists do – bad linework, worse lettering, and worst ideas.

Is it just me or it looks like those magic worm toys that were popular in 2019? Maybe, it’s a scorpion or a tarantula but that is what art is about, right? The beauty is in the eye of the beholder?