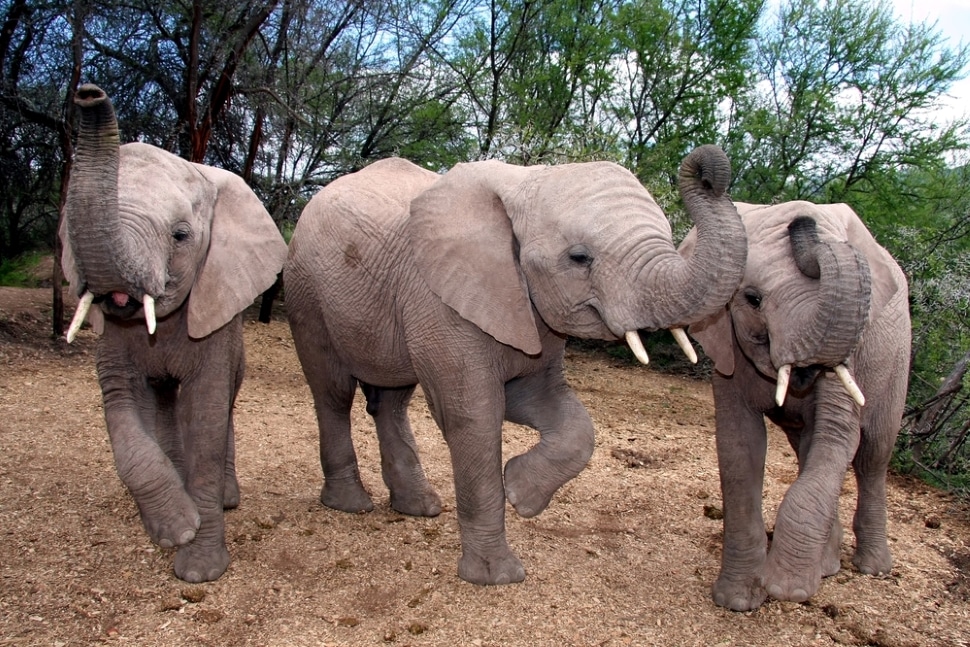 Wolves hunt in packs. Birds fly in flocks. From a herd of cattle to a school of fish, you’re probably familiar with at least a few collective nouns that describe animals in groups. However, the animal kingdom is pretty big, so we’re willing to bet there are more than a few terms you’re not familiar with. There’s a lot of fun and unique words to use instead of just pack, herd, flock, or school, and this article contains some of our favorites.

What do you call a group of tigers? Or a bunch of elephants? Let’s find out.

A Dazzle of Zebras

Also referred to as a zeal or herd, a dazzle of zebras is pretty stunning, even if it’s just in black and white. Zebra herds can reach up to 1,000 members, and just like a human fingerprint, no two zebras have the exact same stripe pattern. There are three different types of zebras, and each kind has a varying average number of stripes, but the overall average is 26-80 stripes per side.

A Kaleidoscope of Butterflies

Butterflies come in a kaleidoscope of colors, which is probably why a group of them is called that. Other group names for butterflies include a flutter, flight, swarm, or wing, but kaleidoscope is definitely our favorite. There are some 17,500 butterfly species in the world, with 750 species residing within the United States.

A Sleuth of Bears

Also called a sloth of bears, either group name works pretty well for these big, fluffy cuties. As sleuths, bears are pretty curious critters (not every mischievous stunt from Yogi Bear was completely made up), and as sloths, they can hibernate anywhere from a couple of weeks to seven and a half months at a time.

A Tower of Giraffes

A group of giraffes is called a tower, a name we think fits perfectly considering they’re the world’s tallest mammal. The average adult giraffe is 15-20 feet tall and 1,200-2,600 pounds, while baby giraffes are born about 6 feet tall and weighing 200 pounds.

A Bouquet of Hummingbirds

Admit it: hummingbirds just got even cuter. In addition to being called a bouquet, other names to describe a group of hummingbirds include a charm, a tune, a shimmer, a hover, and a glittering. Is it just us, or do all of those sound absolutely beautiful? There are over 300 species of hummingbirds, and they’re the only bird that can fly backward and upside down.

A Smack of Jellyfish

A smack of jellyfish can also be a swarm or bloom.

Despite the fun name, don’t smack or even touch a jellyfish. Multiple jellyfish species are dangerous to humans, stinging up to 150 million people each year. Not all stings are fatal, but the venom can still be very painful. Best to admire them from afar then.

A Pandemonium of Parrots

You could just refer to a bunch of parrots as a flock, but a pandemonium of parrots is so much more fun to say! It’s also really fitting for the talkative birds, as a pandemonium refers to a “wild and noisy uproar.” Parrots in a group can also be called a company or prattle.

The Sun Conures (also known as sun parakeets) pictured above are one of several talking parrot species. Curious to know the difference between parakeets and parrots? Parakeets are technically just small or medium-size species of parrots.

A Destruction of Wild Cats

To be clear, a destruction of cats isn’t referring to your domesticated housecats Whiskers and Lady Snuggles. We’re talking about stray, feral cats who live in the wild outdoors or the back alley behind a restaurant.

Another name for a group of wild cats is a dowt, but destruction is definitely more fitting. Feral cats carry a multitude of parasites and diseases, and have been linked to the extinction of over 60 species of birds, mammals, and reptiles. If you see a stray cat, contact animal control so they can be treated for any potential diseases and spayed or neutered so their population won’t increase and damage your local ecosystem.

A Streak of Tigers

The aptly named streak of tigers typically occurs in captivity or when a mother tigress is raising her cubs. The rest of the time, tigers live and hunt alone, in part because they’re highly territorial. A group of tigers can also be referred to as an ambush, and the average tiger has over 100 stripes.

A Galaxy of Starfish

With a name like starfish, it makes sense that these aquatic critters have a group name that’s out of this world. In addition to a galaxy of starfish, they can also be referred to as a constellation. Also, since starfish aren’t actually fish, most scientists prefer to call them sea stars. There are roughly 2,000 species of sea stars, and while a total of 5 arms is the most common number for various species, some sea stars can have 10, 20, or even 40 limbs!

If you ever see a sea star in the wild, do not pick it up out of the water, as it can suffocate. Likewise, if you find a starfish on the beach, leave it alone. Some sea star species do spend some time out of the water, but their bodies are fragile, and human hands covered in sunscreen or just normal, healthy bacteria can be toxic to several species.

A Parade of Elephants

A group of elephants can be referred to as a herd or a parade, but parade is definitely the more fitting choice. Just look at these lovely elephants traveling so merrily in a line. How can you not call that a parade? Elephants travel in single file, with the lead female at the front and young elephant calves often holding onto the tails of their moms.