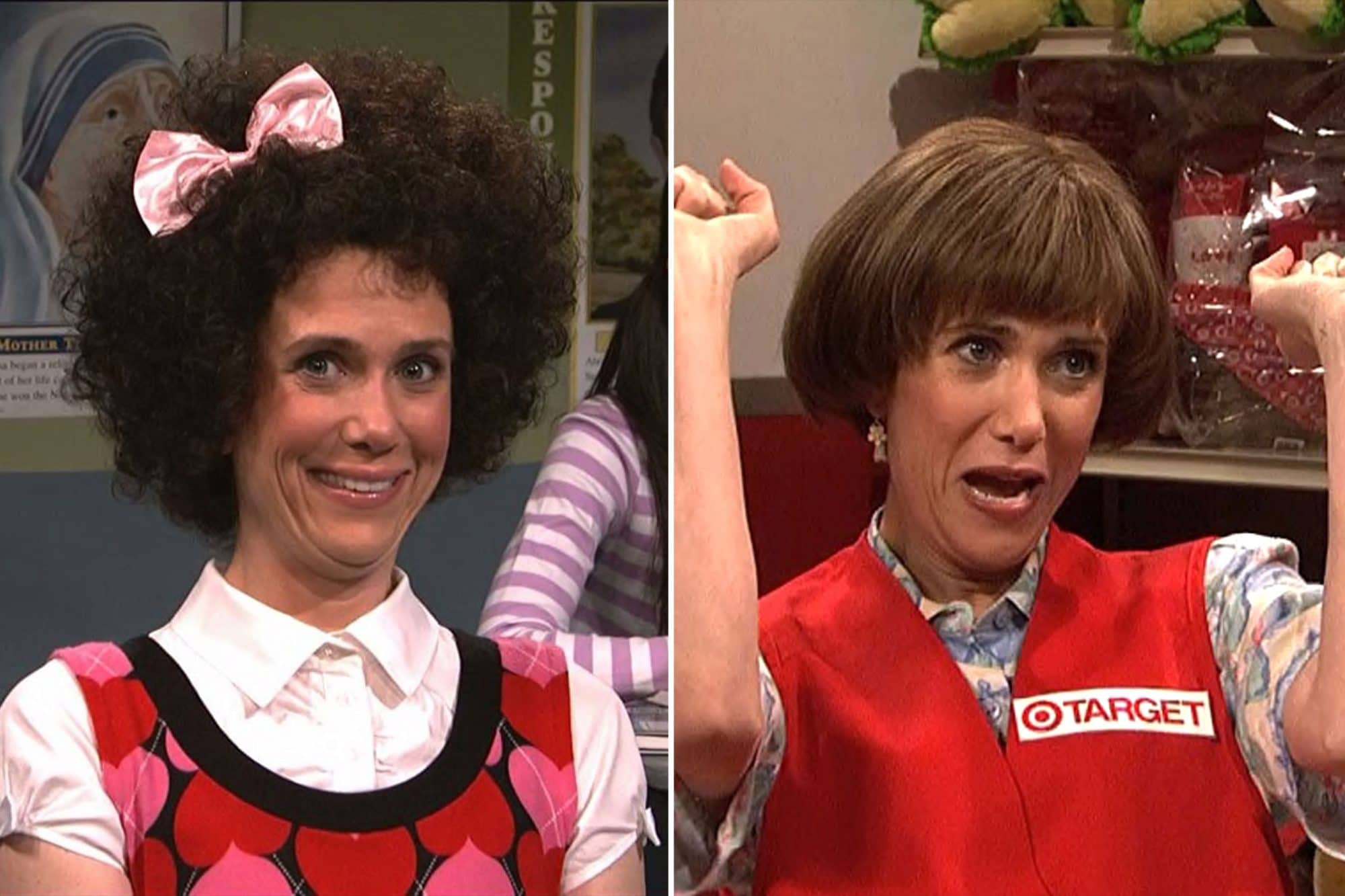 Saturday Night Live (SNL) has been on television since the 1970s. During that time the cast and creators have kept us laughing through good, bad, and ugly times. They’ve also given us characters that we still talk about and love to rewatch today!

These are some of the funniest, wittiest, and most iconic Saturday Night Live characters.

Molly Shannon’s character, Mary Katherine Gallagher, was so successful that she based an entire movie around it! Superstar was a hit among SNL fans. It also grew a wider audience because it featured other big names, including Will Ferrell and Elaine Hendrix.

When Entertainment asked Shannon about the character she explained that her mother, younger sister, and cousin died in a car accident when she was 4. She went on to say, “Gallagher was really based on me, how I felt after the accident — really nervous, accident-prone, wanting to please, f— up but full of hope,” she explained. “I just exaggerated everything I felt as a little girl and turned it into a character.”

Dana Carvey played several memorable characters during his tenure on SNL from 1986 to 1993: the Church Lady, George W. Bush, and Arnold Schwarzenegger to name a few. One of his most popular was Garth Algar, of Wayne’s World fame. Carvey and his castmate, Mike Meyers, developed Wayne and Garth, and they eventually became household names. As a result of their growing popularity, SNL’s producer, Lorne Michaels, agreed to produce the movie.

Eddie Murphy was only on SNL for four years (1980-1984) but he’s left an indelible impression on the show and on the entertainment industry. His performances in 48 Hours (1982), the Beverly Hills Cop series (1984), and Trading Places (1983) not only earned him Golden Globe nominations but gave him a place in Hollywood’s elite.

Mr. Robinson is partly a parody of Mister Rogers’ Neighborhood. The only comparison between the two is found in the opening sequence to the sketch when Murphy sings a song to the audience. Mr. Robsinon lives in a run-down apartment building, and he’s constantly being hounded about his late rent by Mr. Landlord (Tim Kazurinsky). Good ol’ Mr. Robsinon is also wanted for petty crimes, such as defrauding children of their toy money during the holiday season.

The real Mister Rogers did not appreciate this parody. In fact, he deemed it a harmful misrepresentation of his show.

Now known for her work in films such as Bridesmaids, Ghostbusters, and Barb and Star Go to Vista Del Mar, Kristen Wiig rose to fame on SNL in 2005. In an interview with Biography, she explained that she’s always had a quirky sense of humor, “I used to carry my dad’s empty guitar case around the neighborhood because I wanted people to think I played the guitar. I would put Flintstones vitamins in it in case I got tired, so I could pop some and keep walking.”

Gilly is an elementary school student who is mysteriously disobedient. She often pulls off elaborate and violent stunts without anyone in the class noticing. After watching the teacher accuse other innocent children of her wrongdoing, she simply smiles and says, “Sorry.”

Adam Sandler enjoyed one of the most prolific movie careers of anyone who got their big break on SNL. He’s also one of those actors you either love or hate. (No offense, Adam.) Even so, no one can argue with the box office success he’s enjoyed. Movies such as The Wedding Singer, Happy Gilmore, and Billy Madison, were all popular with SNL fans, and they expanded his audience to the general public.

Opera Man was basically a character who put the news to song. He would add vowels to the ends of his words to make him sound Italian, but we all knew the truth–he wasn’t Italian. Such a guy from Brooklyn who knew how to make us smile.

Catchphrase: Randomly adding an “a” or an “o” to any word. For example, “Game of Thrones-ah, almost fineto. Motto exciting edge of my seat-to, we can’t wait for final show-ah, we can cancel our HBO-ah!”

Chris Farley created some of the biggest characters on SNL and some of the most memorable in his subsequent career in film. Unfortunately, he passed away in 1997 at the age of 33. Fortunately, he left us with a strong library of films we can enjoy again and again–Tommy Boy, Black Sheep, and Beverly Hills Ninja, to name a few.

Matt Foley is an atypical motivational speaker. Usually, people who do this for a living are clean-cut, composed, successful, and charismatic. Foley, on the other hand, is abrasive, clumsy, and down on his luck. This broadly drawn character warns his clients that if they don’t as he says they will end up in “a van down by the river.” Not only did he crack up everyone in the audience, he was famous for also evoking laughter in his scene partners.

Catchphrase: “You’ll be living in a van down by the river!”

Rachel Dratch played upon the stereotypical person who interjects bad news into otherwise lively conversations. Her character, Debbie Downer, went to social gatherings for the express purpose of warning others about any danger she could think of, whether related to the conversation or not. One of her top worries was feline AIDS and the havoc the disease is wreaking on fictional cats everywhere.

Debbie Downer‘s party faux pas were followed by a signature look to the camera and a “wah wah” sound effect produced by a muted trumpet. One of things we loved about this character is that we all know someone like this in real life, and seeing her on the small screen helped us laugh at our own misfortune!

Catchphrase: Ridiculously dark suggestions of things to worry about. For example, “Ever since they found Mad Cow Disease in the U.S., I’m not taking any chances. It can live in your body for years, before it ravages your brain.”

Bill Hader is simply charming. He’s the kind of guy you assume you’d love to go grab drinks with if he lived next door to you. While Hader rose to fame on SNL, he went on to enjoy an active career on both the small screen and the big screen. You probably know him from his supporting roles in Knocked Up, The Angry Birds Movie, and They Came Together, and his lead role in Barry, the HBO series he helped create.

Stefon is a caricature of all the hip New Yorkers we’ve ever known. He’s featured on Weekend Update with Seth Meyers. Meyers asks Stefon to give the audience tips on all the coolest destinations and events for visitors. Stefon’s responses not only bring hilarious laughter the audience, they also make Hader himself break character quite often. Thanks to Wikipedia, we have a list of some of his best recommendations, “Stefon recommends unusual clubs and parties with bizarre characters and very specific tastes, described as “visions a dying gay man would have if he was under too many blankets,” “nightmares of a crystal meth addict,”or a, “coked-up gay Candyland.” We see why Hader could barely keep a straight face!

Though Dana Carvey has stepped out of the lime light so he could spend more time with his family. he was wildly popular throughout the 80s and 90s. He’s mentioned earlier in this article for his work as Garth, but we needed to mention him again in the role of Church Lady.

Church Lady, also known as Enid Strict, is uptight, smug, and comically pious. She was meant to caricature televangelists of the time. The basic set up was that she’s have a guest celebrity on her talk show, which she would invite under the guise of wanting to interview them. Within minutes she would turn their innocent chat into an indictment of the guest’s sins. The comedic flare with which Carvey played this role was accentuated by the “Superior dance” he would perform to close out each of the fictional talk show episodes.

Will Ferrell is a force of comedic genius. Well, at least we think so. He’s another one of the SNL actors that people tend to either love or hate. We fall on the former side of the coin! It’s hard to say what Ferrell is “most known” for as he’s done a lot of acting since leaving SNL. Anchorman, Step Brothers, Talladega Nights: the Ballad of Ricky Bobby, and Anchorman 2 are some of the comedies that made him a household name. He’s also found success in dramatic roles such as Stranger Than Fiction and Everything Must Go.

Craig the Cheerleader was a mainstay on SNL throughout his tenure on the show. Partnering with Cheri Oteri as Arianna the cheerleader, the two energetically did cheers that no one in their right minds would perform in real life. For example: