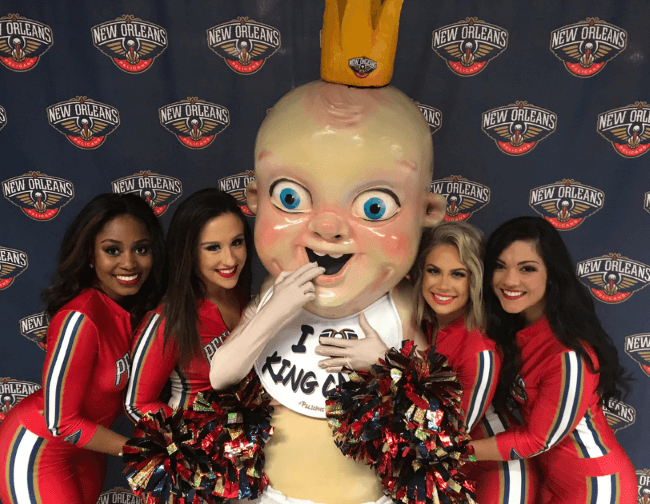 In the sporting world, mascots are often beloved team members, embodying team spirit and working wonders to pump up a crowd. However, not every mascot is iconic. Some are downright creepy or just plain weird. Some mascots are hard to recognize, like the humanized hammer Herbie, or unnecessarily terrifying, like the steel-faced BrooklyKnight. Some, like the Stanford Tree, aren’t even endorsed by the teams they support. However, fans usually don’t mind these various quirks as long as they have someone dressed in a silly suit to take pictures with.

From zany mascots that are somehow popular, to the retired rejects of the past, these are some of sports’ strangest mascots.

If Frankenstein’s monster had a baby with a neon yellow highlighter, you’d get WuShock. The Kansas-based college mascot sure is puzzling at first glance, but he has some humble roots as a burly bundle of wheat. When the mascot was chosen in 1948, many college football players would harvest or “shock” wheat in the offseason to earn money for their tuition. While definitely an oddball, WuShock is a memorable, blindingly-yellow mascot.

Technically, Stanford University doesn’t have an official mascot, which is where the Stanford Tree comes in. Modeled after the famous redwood tree in the university’s logo, what started out as the band’s mascot in 1975 has become a campus-wide sensation in the decades since. The tree has undergone several makeovers over the years, as each costume is student-designed. Each has its own degree of campy weirdness, and it’s definitely one of the goofiest mascots we’ve ever seen.

Based in Glasglow, Scotland, the Partick Thistle soccer team unveiled their sun-themed mascot, Kingsley, in 2015. Why they went with a disgruntled sun with a unibrow, we may never know, but the spikey-headed mascot is far from a ray of sunshine. It’s more like a beam of terror.

No, this isn’t a live-action Space Jam remake or the Christmas Story bunny suit all grown up. Unfortunately, this is one former mascot for the Sixers basketball team, who has had a couple of failed mascots over the years. Despite an athletic build and some impressive halftime show stunts, the creepy rabbit was retired in 2011.

The official mascot of Xavier University is D’Artagnan, who goes along perfectly with the musketeers’ theme. That being said, the university also has a secondary mascot known as the Blue Blob. While it’s popular with the kids, everyone else agrees the mascot looks more like a generic Sesame Street spinoff. There can only be one Cookie Monster, and the Blue Blob isn’t it.

Often referred to as the Hammers, the English soccer team, West Ham United, had a personified hammer named Herbie as their mascot for some time. In part due to potential copyright infringement, in 2011, Herbie was replaced by another hammer-themed mascot, the athletic Hammerhead. It was probably for the best, as Herbie’s constant surprised expression was far more goofy than intimidating.

When brainstorming Canadian-themed mascot ideas, for some reason the Vancouver Canucks didn’t pick a maple leaf or a moose or even a Mountie. Instead, the hockey team went with an orca named Fin as its mascot. Sea creatures are usually pretty adorable, but it’s hard to ignore the pointy teeth the killer whale is known for, or how often Fin playfully “pretends” to bite someone’s head. Yikes!

When the Nets returned to Brooklyn after a few decades of playing basketball in New Jersey, they debuted their comically bad, comic-book-based superhero mascot, the BrooklyKnight. Shiney but scary, the mascot only lasted two seasons before retiring, and that’s probably for the best as its metallic face is pure nightmare fuel.

Team: The 2012 London Olympics and Paralympics

Did you know Olympic Games have official mascots? We sure didn’t, and wish we could go back to the days of our innocence before we encountered this pair.

Designed as mascots for the London 2012 Summer Olympics and the 2012 Summer Paralympics, respectively, cyclops-like Wenlock (orange) and Mandeville (blue) are just plain puzzling to look at. Each mascot’s overall look was designed with significant symbolism tied into both games. However, it’s hard to get past the fact that their heads are meant to resemble taxi lights, and their bodies are supposed to represent pieces of steel used to build the Olympic Stadium. These two are a solid 12 out of 10 on the weird scale.

Unveiled in 2009, King Cake Baby is a seasonal mascot for the New Orleans Pelicans. Appearing during the Mardi Gras season, the basketball team mascot is inspired by the baby figurines placed in king cakes, as Mardi Gras is a massive celebration for the city. Despite the festive intent, it’s hard not to be completely terrified by a baby that looks more murderous than cute.