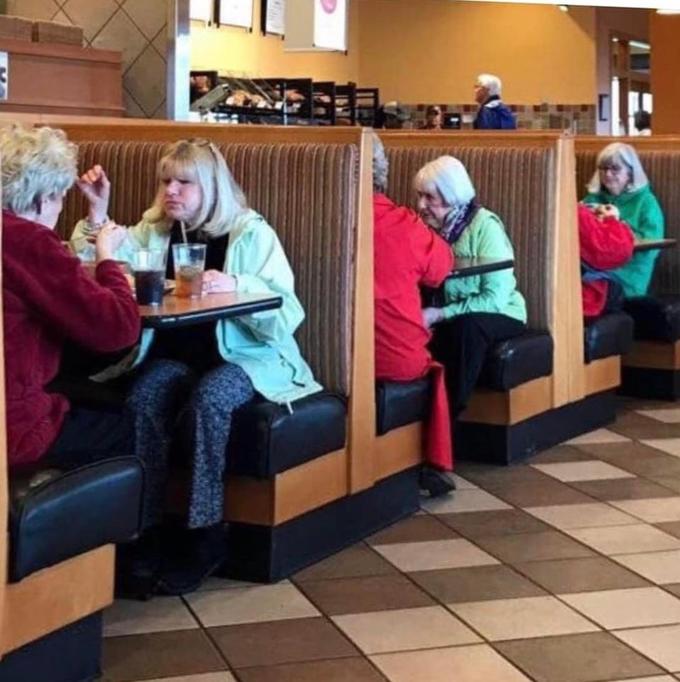 Remember the Jim Carrey movie The Truman Show when Truman is living in a television show, and he’s the only one who doesn’t know it?

Or, what about The Matrix, where the simulated world seems even more accurate than the real world?

These movie plots are popular because they add an element of mystery through which we might view our own lives. For some, it’s fun to discuss the possibilities! Others believe there is a solid chance we are living in a simulation.

Whichever side you land on, you’ll probably admit these photos seem to capture moments when “something” odd is happening. What causes these glitches in the system we call life?

Right Down to the Same Cane

Imagine everything that had to happen for this moment to take place. These gentlemen had to choose every piece of their outfits, place these hats on their heads, put their coats on, and then grab their canes before heading out the door. Regardless of what time they woke up or left the house, they had to make a series of choices that caused them to cross paths in this one spot. Then, the same thing had to grab their attention simultaneously, and then the person behind them had to be looking at them at that exact moment.

Is that even possible? And what about people driving their cars with coordinating license plates, side-by-side . . .

One of the first games most babies learn to play is “Peekaboo.” As you probably know, the exact words of the game are, “Peekaboo, I see you.”

In this photo, two people who still have those words rattling around the transoms of their minds happen to be driving side by side on a busy street. They don’t even appear to be from the same state. What are the odds?! Maybe the odds aren’t as important as considering the possibility the head of the simulation made a mistake!

A mistake that’s similar to failing to sync this television and this mirror . . .

The person who took this photo probably intended to share a relaxing moment of watching TV with her cat. However, what they captured is an apparent tear in the time and space continuum.

How, may we ask, is it possible for a mirror to capture an image that doesn’t correspond to reality? We can’t even speculate on how this occurred. And though the cat doesn’t seem to care, we do!

We care about as much as these two men cared about meeting their apparent twin “by chance” . . .

This is another story where the events that had to occur to make this moment possible are staggeringly many! To begin, their parents–who must have looked similar to one another–had to meet one day long ago . . .and that’s just the beginning! Then, the guy in the black coat had to plan a trip overseas. He had to travel to Istanbul, book lodging near this grocery store, and get hungry right around the time his apparent twin happened to be working.

Once you start to break down the events that made this moment inevitable, you do wonder if it was a fluke . . .or orchestrated by someone in charge of the simulation! Eeks!

We think this next photo proves the simulation is highly edited . . . most of the time.

Whoever edited the shadows in this part of the simulation must have been late to work that day. They had one job!

Fortunately for us, someone happened to catch the error before it was corrected in post-production.

Speaking of edits, who got lazy and copy-and-pasted two of the same cat?

These Cats Are Not Related

Can you imagine casually sipping your morning coffee and waiting for your cat to finish his morning garden time only to be met with this sight?

There are two options here: one, the cat was duplicated due to an editing error. Two, a cat that looks exactly like this woman’s cat had to live a life filled with choices that somehow led her to the very same yard where a look-alike happens to be lounging.

The sim world loves to bring animals and people together, as we see in this next photo . . .

Romance Is Alive in This Simulation

There is something heartbreakingly beautiful about this photo. Perhaps, it’s a signal that we are never truly alone. Or, maybe it’s a lesson about how the moment-by-moment choices we make in life lead us to tables where we sit by ourselves or alongside someone else.

It could also simply mean some simulations are more romantic than others. Maybe?

We think this next photo is a lesson in hiring good artists to illustrate the simulation . . .

Our minds can’t comprehend the why behind this photo. Did all of science and nature take a day off, or is this the best evidence we have for the simulation theory of life? We’re not sure there’s room for a middle ground. It’s one or the other!

Either way, we wish the artist behind this apple would have paid more attention to detail. We assume whoever ruined the apple also botched this seemingly simple line of women . . .

All six of these women chose to meet someone for lunch at this exact location on the same day. Okay, that doesn’t seem so outlandish.

Then, three of the women decided to don their green winter attire and a pair of black pants. Okay, still plausible.

Finally, the women with proclivities for green sat on one side of the table, while the women in red sat on the other. They all chose the same sides according to their corresponding colors, and they all sat in a row.

Nope. Not even possible. This is a glitch that must have gotten someone fired.

The next glitch, however, must have won someone an award for “Cutest Proof of a Simulation.”

An Ode to David Bowie

Well, this is just adorable. One of the biggest hits of the 1960s and 1970s was brought back to our memory by a clever simulation director who made this moment possible.

Or, Ground Control and Major Tom’s Air Repair just happened to show up on the scene at the same time and parked right next to each other.

What do you think?