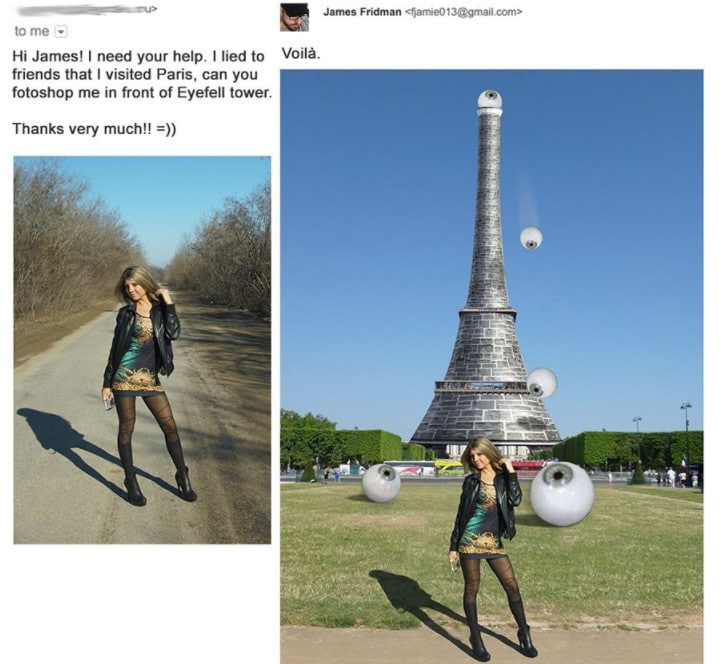 James Fridman is a graphic designer with a flair for the comedic. Fridman quickly rose to fame when he started accepting Photoshop edit requests from strangers on Twitter, and creating surprising–and hilarious–edits.

Fridman’s humor is clever and good-natured, so his followers know his final products will be a light-hearted joke at their expense–never cruel or demeaning. As a result, they trust him with life moments that range from sacred to mundane. This couple’s intimate moment ended with a bang!

The joy on this bride and groom’s face is easy to see. What isn’t quite as accessible is the full beauty of the bride’s dress! In an effort to clear this photo of the dreaded pole, the bride sent it to Fridman with a simple request, “Can you remove the pole in front of me!!”

In his true comedic–and ironic–fashion, Fridman removed the pole and followed the joke to its logical conclusion.
The more fame Fridman accrued, the more people realized they needed to be more specific in their requests. This guy, for example, should have specified he didn’t want to end up naked.

Being One With The Rock

All she asked for was a profile-worthy photo. She traveled all the way to Turkey for a grand adventure and she–like all of us–wanted an epic profile photo to show for it.

I mean, isn’t that why we travel nowadays? It isn’t for airplane food or long lines at Customs!

“Can you make him disappear?” It was a reasonable request. And, technically, Fridman complied. Kind of.

Be specific. MORE specific. The next woman was captured in front of a majestic waterfall that’s probably featured in a book of beautiful waterfalls somewhere. There was only one thing that would have made the photo more alluring.

How close is too close? We’re not sure Diane would be pleased with James’ take on making her look closer to the camera!

This guy had a simple request: look like an “agent.” James thought he’d look best as a real estate agent, as shown in the photo on the right.

Plants can’t grow without water, which might be why James’ picture on the right looks so barren!

Lamp Out, Lights Out

The lamp is obviously this girl’s source of light in this photo. So, when she asked James to take it away, the result was pretty dim!

This woman’s request was a bit unusual, but James took care of it. Unfortunately, the orb she requested ended up completely distorting her face!

While bears look fluffy and huggable in pictures, they are still wild animals in real life and should be treated as such. It makes total sense how the picture would have turned out if the bear was real.

How many leaves are too much? The tree indeed looked bare with all those leafless branches, so we understood where this man was coming from. The thing is, he did not say how leafy he wanted the tree to be, so James took it into his own hands.

Yikes! This couple just wanted a photo with some ducks in the pond, but they couldn’t time the photo right. James had the clever idea of inserting ducks in the photo, just on roasting sticks instead.

Sure, the chair this man is sitting on doesn’t quite match the “aesthetic” of the beautiful garden, but we’re not sure what he was expecting when he reached out to James.

Perhaps this requester should have checked her spelling before sending James a Photoshop request. Because while James takes his work seriously, he also takes it quite literally! Unfortunately, this woman ends up transported to a bizarre place after having misspelled the Eiffel Tower.

This guy wanted to make it look like he was sprawled out in the middle of a crime scene. James, of course, had a much cleverer response and added in a sign that made him a casual rule-breaker instead.

Why fit in when you’re born to stand out? It seems like this guy didn’t feel comfortable being the only redhead in his family, so James shifted the attention to his whole family, who all became redheads.

Excluding friends isn’t kind, so James had the idea to take the “girl in the violet skirt” out instead!

How To Get His Attention

Cell phones often have a way of preventing face-to-face communication, even during dates. How could this woman possibly get her boyfriend’s attention while he’s busy on the phone? James had the perfect idea!

Who Let The Dog Out?

Lying has its consequences, and this photo is perfect proof. Moral of the story: don’t lie to your friends, otherwise you mind end up with a dog’s body!

Certainly, nobody wants to be put in an awkward spot, no matter what the circumstance is. This guy probably didn’t expect his friend to move from the floor to a bed in the photo-shoppped picture!

This lady had a dream of being in space, and that’s exactly what she got. The thing is, it was rather a space bar on a keyboard, not outer space!

This requestor might have gotten rid of his weird hand, but it came with a price. Now, an even weirder guy appears to have misplaced his hand on his girlfriend’s hips. Yikes!

Rebecca felt the need to adjust her boyfriend’s feet, which she thought were too long, so she reached out to James for help. It turns out, Rebecca’s feet only got longer in the photo on the right!

It must have been a real struggle for the girl to jump higher, given how awkward her pose ended up on the left photo. Thanks to James’ idea of a trampoline, she could now fly higher off the ground.

What other character from Star Wars would be better for this guy? We agree with James that Chewbacca was the right choice.

Everyone has fears, and if there’s one scary thing we can almost all agree on, it’s responsibilities!

This woman asked to become a cat, but she got something else in return. Think she was expecting to be the kind of cat James had in mind? We don’t!

Getting rid of the trash can meant something else for the Photoshop pro, as showed in this picture!

Science reminds us that playing with the time-space continuum has its repercussions. Hence, if the mom was younger, then the boy had to also be a little younger.

In reality, this was the closest this guy could ever get to the fall if he didn’t want anything awful to happen to him. Seems like it wasn’t obvious enough, so James granted his wish so he could get the picture.