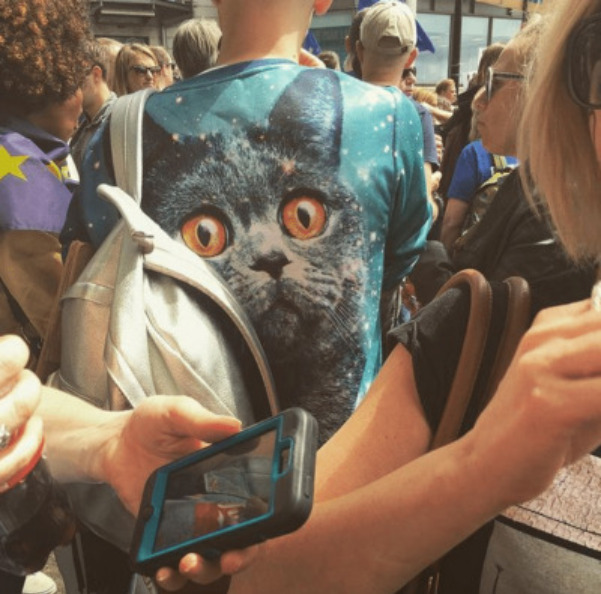 A great T-shirt comes in many forms, whether a shirt paired with a given situation makes for a perfectly timed funny photo, or in the case of notorious T-shirt typos, they’re misspelled so bad they’re good. A funny tee can really turn a frown upside down, which is why we’ve collected some of our favorite T-shirts off the Internet. Enjoy.

Even if you don’t read his shirt, his face says it all.

When you see it.

Aww what a sweetie. So great to see young ones reading – oh my goodness no!!!

Oof. And I’m going to report you to the grammar police.

If this picture is any indicator, these siblings are in for a long, tear-filled childhood.

Wonder what’s the most shortest mountain in Japan?

How does one walk a fish? Do you carry it around in its bowl? Let it swim a few laps in the tub?

Michael Jackson Has Left the Building

There’s no doubt this pup is spoiled and rightly so.

Um, that’s not where the Eiffel Tower is.

Depending on the circumstance, we all could use a little stupid from time to time.

This would be fine if they’d actually hired a grandma to pose in the shirt.

What are the odds the person’s last name is “Thirteen”? We’re guessing not very high.

Not sure if this would help or hurt your efforts in a team setting.

Either Grandma is officially losing it, or she forgot to put her nickname on this shirt.

Clearly, the person on the other end of the line didn’t follow directions.

The left one is cute, but the right one will get you reported to Child Services.

Someone get this T-shirt designer a map. That’s clearly Australia.

These two are adorable. Are they wearing each other’s shirts? Did they get the sizes mixed up? Did they misspell “She’s”? We’ll never know.

Um, I think the only person that’s allowed to call your aunt “bae” is her spouse.

The font is just pretty enough to pass as cute until you actually read the words.

Where’s the Stars and Stripes?

Think it’s safe to stay that both the UK and the USA aren’t happy about this one.

The sister shirt would be “Don’t do vegetables, eat your school, and stay in drugs.”

The longer you look, the worse this shirt gets.

Some people wear their heart on their sleeve, some on their mood ring, or in this case, just on their plain old face.

Block of pigeons, flock of cheese, it’s all the same. Though not really.

It’s probably the most common last name, to be honest.

Too Much Going On

That’s a lot of verbs that sound exhausting. What about sleeping, resting, lounging, napping?

War of the Logos

When you can’t choose between Nike and Old Navy, you get both.

Don’t you tell me to never do my best!

“Always say no to peer pressure unless it’s going to be super fun.” – Another version of this shirt.

Motivation at Its Finest

So I can’t give up hop, but can I give up jump and skip?