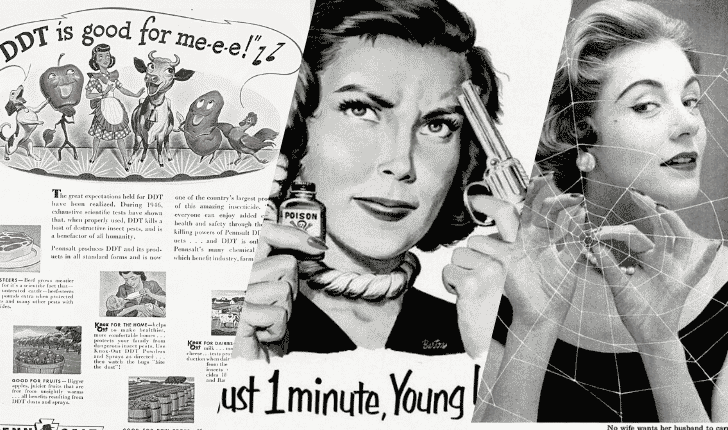 Advertising and marketing have come a long way since the early days. Although there are some things that have stayed around for years, sexism, drinking, and smoking–companies got away with all sorts of ad campaigns that would probably be boycotted today. Times have changed, and that’s often a good thing – but there is still an appeal in walking down memory lane to see how things were advertised before society regulated such actions. These ads provide a window back in time where one can learn more about what was happening socially or politically at the time, as well as showcase yesteryear’s fashions, hairstyles, and much more. If you enjoy history then these eye-catching vintage ads will surely catch your attention with their unique selling techniques for just about every product imaginable.

Was it the blatantly racist statements or strange behavior that caused this company to go bankrupt?

Who are you calling fat?

Lane Bryant is still in business today, but they have, unsurprisingly, changed their branding to something other than Chubbies.

This advertisement would not be approved of nowadays – unless she was literally pouring hot coffee onto his lap!

With the ever-present obesity epidemic, few if any major candy companies are encouraging mothers to give up apples in favor of sugar-packed snacks.

Very few doctors smoke cigarettes these days, and none of them will promote cigarette smoking to maintain their medical license.

If he wants cake, he should bake it himself!

A Kitchen Aid is a delightful gift for the culinary-inclined woman, but in today’s day and age, it doesn’t mean we owe men homemade cakes all of the time.

Poison and fresh produce never go together. But back then, such things weren’t unheard of – at least not for this advertisement, which would’ve fallen flat had it been released nowadays.

This Is Downright Rude

Women are not the root cause of STDs, but you would never know from this advertisement!

Straight people also love it too!

Not so long ago, the term ‘gay’ was used to refer to someone who was happy. Though if we ran this ad in today’s society, there would probably be some raised eyebrows for obvious reasons. However, one does not need to be gay for them to enjoy what this ad has to offer.

It’s difficult to tell what this advertisement is trying to sell. It looks like it may promote suicide.

Promoting Female Rivalry One Advertisement at a Time

Scaring women with thoughts of infidelity doesn’t seem like it would make for an effective marketing campaign.

It was great when Busty was best

Crazy inventions were popular back in the day but you won’t find this one on sale now.

Get These Babies Some Air!

Cellophane might be acceptable for your food leftovers, but it should never, we repeat, never make its way onto a baby’s face. The company had been running ads with babies- what were they thinking?

Babies and razor blades? Believe it or not, the company probably shelled out a ton of dough for that creepy old advertisement.

Advertising executives must take into account every possible meaning when designing a slogan. They probably didn’t want to spend too much time thinking about it because they were hungry and wanted to go out for lunch soon.

A Cup of Domestic Violence?

Domestic violence is worse than drinking old coffee. Thankfully, an advertisement like this wouldn’t be accepted today.

Today, purposefully consuming a parasite can result in an emergency trip to the nearest mental health clinic.

Clearly, the people responsible for advertising in the 50s and 60s felt it was a woman’s place to be in the kitchen.

This advertisement proves that no matter what culture or language you come from, the bad taste can still affect everyone.

Tab Soda thought it would be best for them to support those struggling with their weight or who are trying to lose weight by telling them that they will always matter no matter what size. No doubt this could have helped promote healthy eating habits and prevented people from developing other body image issues like anorexia nervosa and bulimia nervosa.

Responsible advertisers know how important it is to keep little girls well-dressed in the advertisements they use today.

People still argue over whether or not tampons are effective marketing.

There was only one woman in the office shown in the ad, and she was taking phone calls and writing things down for others.

Getting Beautiful Is a Pain

This machine looked terrifying but it was actually just a lawsuit waiting to happen.

The Racially Insensitive Past

This advertisement is not only sexist but also overtly racist. Ads like these bring back memories of a time when life wasn’t quite so pleasant – even if it seemed that way at the time.

What does it mean when you stretch out a woman?

What does being a woman who has been stretched taut have to do with power tools?

Not a Healthy Option

Surely, this soda company knows about how bad it can be for children when they drink pop instead of something healthier like breast milk or formula. I don’t think any company these days would try to convince mothers to give their baby soda since the health risks are so high nowadays.