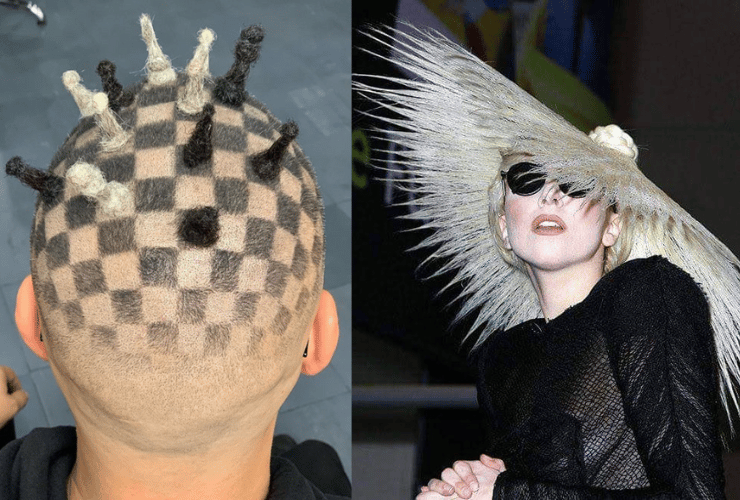 Hairstyling is an interesting medium, to say the least. With just some scissors, hairspray, and a bit of hair dye, your head can become a strange, wonderful canvas. In the following cases, hairdressers ditched ordinary do’s and went straight for the extraordinary.

Excuse me, sir, you’ve got a gigantic spider on your head.

Imagine walking behind this man and thinking he’s got a big spider resting on his head. But that is his hair! Weird doesn’t begin to describe it.

The need to create something unique and stand out from the crowd often drives people to do dumb stuffs. Because how else do we explain this ugly-looking helicopter hair?

I am tired of losing my hats bro!

This man probably lost too many hats that he decided to get his afro carved into a cap. That is ingenuity at its peak!

Everyone poops but this man apparently loves doing it more than the rest of us.

This haircut makes us wonder what pushed this gent to the edge. Because why did he have to ruin his hair and his entire love life with that haircut?

This is that one haircut that ruins your career, wrecks your love life, and destroys your chances of ever finding love and he knows it.

Sir, what’s that on your head?

When you thought you have seen it all then this man shows up with his long spiky weird hair.

I can’t hear my haters.

Whatever you have to say about this woman, keep it. She can’t hear her haters!

Avatar Aang is that you?

This dude wanted to save the world so badly that he got an Avatar Aang haircut. But he  doesn’t look too happy with his decision and we wonder why.

This man took his love for the designer bag to the next level. He had a Louis Vuitton pattern shaved into his hair and stuck a gold zipper before adding a handful of dollar bills.

Even though this haircut is weird, it looks fun at the same time. We are sure this man had a good time messing with people.

Now, this haircut doesn’t look that bad. It’s just weird thinking you saw a giant gecko on a person’s head.

No doubt this man is a tennis sports lover because he has a bizarre way of showing it.

This haircut is not only strange, but the green spiky hair is also horrible. We don’t think he loved it either.

We can’t deny this haircut is colorful and distracting. We just have to appreciate the artistic prowess of the hairstylist.

Nothing surprises us anymore when it comes to Taribo West and his outrageous hairstyles. The Nigerian defender is famed for his odd hairstyles as well as his defensive skills.  This is probably the least weird hair he has sported.

We gotta give this mister a few moments to arrange his thoughts.

Tupac is a  legend of some sort to hip-hop lovers. He was fearless in his lifetime and is revered as one of the founding fathers of rap culture. We have to admit that this haircut looks cool and the barber is talented.

Lady Gaga is many things and eccentric is one of them. She just has a way of grabbing attention with her outlandish ways. If it isn’t a dress made of raw meat, it is a hat made from her own hair. We have to admire her creativity though.

Playing games are we?

All around, this haircut is impressive. Creating such a precise checkerboard pattern is difficult in and of itself, but then the barber took it one step further by strategically leaving behind longer chunks of hair to sculpt into various chess pieces. If this hairdo was part of a styling competition, consider this checkmate!