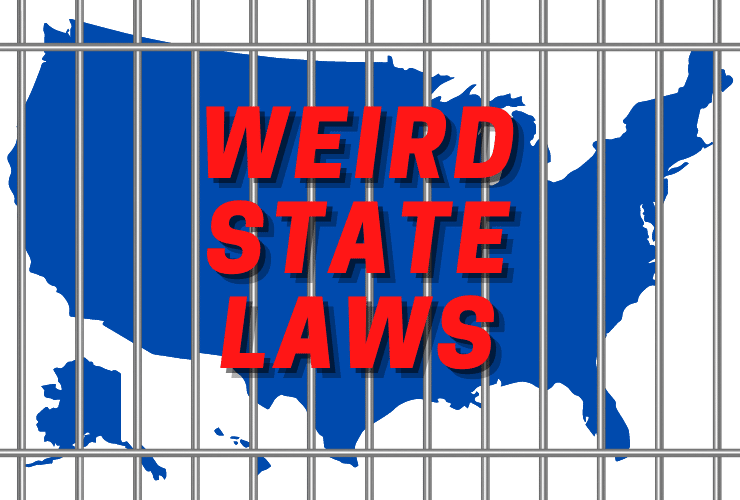 Have you ever heard of an American law so strange and ridiculous you’ve wondered why it exists? While well-intentioned, some laws in the United States are unnecessary, redundant, or just plain weird.

Find out which dental accessory you can’t pawn off in Las Vegas, and why one Colorado city has outlawed catapults. Then, try not to let your jaw drop when you hear about some of Alaska’s most peculiar moose regulations. From Hawaii to New York and everywhere in between, here are some of the strangest laws from the 50 states.

Note: at the time of this article’s publication, some of these laws may no longer be enforced.

In Alabama, you can’t carry an ice cream cone in your back pocket

The actual reasoning (other than the messiness!) is that in the 1800s, it was common for horse thieves to tuck sweets such as ice cream cones in their back pockets to lure horses away. Therefore, banning treats in back pockets was done in an attempt to decrease horse theft.

In Alaska, it’s illegal to push a moose out of an airplane

To anyone who ever thought pushing a moose out of a plane would be a good idea, think again. The act is illegal in Alaska, and while it sounds strange at first, there are some pretty straightforward reasons for why this strange law makes sense:

1. Pushing a moose out of a moving plane would kill the moose, and that’s just a really awful, inhumane thing to do.

2. Since your average moose often weights over a thousand pounds, anything the moose would land on after falling ten thousand feet would be completely destroyed.

When it comes to the five stages of grief, no one talks about the unofficial sixth stage: the munchies. Sometimes when you’ve lost a loved one, food can be a great comfort, however according to Massachusetts state law, you can only help yourself to three total sandwiches at a wake or funeral reception.

Why? We guess this law has less to do with grief and eating one’s feelings, and more to do with people who tend to be a bit on the greedy side when it comes to buffets. Everybody loves free food, but when you’re among grieving guests, it’s best not to hog the hoagies.

Billboards are banned in the state of Hawaii (and Alaska, Maine, & Vermont)

Of the four states that don’t allow billboards, Hawaii has the longest standing no billboards law, passed in the 1920s. As to the reasoning behind the Aloha State’s lack of advertising? It’s bad for tourism!

Since billboards have been thought to obstruct scenic island views, Hawaii passed legislation to keep their state billboard-free. We’re all for it, as the Road to Hana would be a lot less special when peppered with ads for political candidates and the nearest McDonald’s location.

Yep, you read that right: in California, it’s illegal to ride a bike in a swimming pool. While it seems straightforward (attempting to bike in a water-filled pool poses some serious injury and drowning risks), the law actually had a different purpose originally.

Back at the start of the BMX stunt riding craze in the 1970s, tenns would often break sneak into pools and shred up in pools that weren’t filled with water in winter. A skate park would have been better, especially since bikes could potentially ruin a pool.

If you tie an elephant to a parking meter in Florida, you still have to pay the meter

As ridiculous as this initially sounds, this strange Florida law kind of makes sense. If you happen to have an elephant and tie it to a parking meter (and assuming the elephant stays tied to the meter), then you need to pay for the parking spot because normally it’d be filled by a car.

This law is thought to originate with John Ringling of the Ringling Bros. Circus, as he and his elephants helped build causeways in Sarasota, FL. The law probably came into effect after road workers were observed taking breaks and tying elephants to the nearest trees, parking meters, etc.

You can’t dust any public building in Clarendon, Texas, with a feather duster

Just in case you ever happen to be in Clarendon, Texas, and have the desire to whip out a feather duster and dust a public building, think again. Dusting public buildings in this small Texas town is outlawed, though we have no idea why.

Was the law made because people were suspiciously dusting libraries and court houses? And does this dusting ban only apply to people dusting with a feather duster specifically vs. those using other cleaning instruments? We may never know…

You can’t give your dog a lit cigar in Zion, Illinois

About an hour’s drive north of Chicago is the city of Zion, Illinois, where residents apparently take their animals’ tobacco use very seriously. According to city law, it is forbidden for any dog owner to give their pooch a lit cigar.

This law also applies to cats and any other pets, probably because tobacco is just as bad for animals as it is for people.

Why anyone would want to try and sleep on top of a refrigerator is beyond us, but apparently this strange Pennsylvanian law has some precedent. Back in the day, the large, early model refrigerators had their coils mounted on top instead of on the back. Since coils can get warm from keeping the refrigerator running, sometimes on cold nights homeless people would climb on top of commercial units in attempts to stay warm.

Regardless of the era, it’s probably not a good idea to sleep on top of a large appliance, indoors or out.

In Indiana, you can’t catch a fish with your bare hands

For some, fishing is already a fairly difficult sport and/or past time. In the state of Indiana, your odds of catching a fish just might be a bit lower, as the state prohibits fish being caught with bare hands (though if we’re being honest, not too many people are actually quick enough to catch anything by hand, let alone a slippery fish).

This means no noodling (catching catfish by sticking your hand into a catfish hole) or any other forms of hand fishing. Maybe it’s for the best, as noodling can be pretty dangerous!

That’s right. You can get a DUI when riding a horse in North Carolina. It’s bad enough so many people drink and drive, but drinking and riding can be dangerous as well, since you could injure both yourself and the horse. So think twice before drinking up and saddling up when you’re in North Carolina!

It’s illegal to get a fish drunk in Ohio

If you live in Ohio, make sure you don’t get your fish drunk as it’s illegal (and probably pretty inhumane). Alcohol can be pretty bad for humans when taken in the wrong amounts, while fish have completely different metabolisms and digestive systems.

Leave it to the Dairy State to have a butter-related regulation. In Wisconsin restaurants, patrons must serve customers real butter and not margarine. The only exception is when a customer specifically asks for margarine, but who would do that when real, dairy-based butter tastes so much better?

Why would a horse ever attempt to eat a fire hydrant in the first place you might ask? Because fire hydrants used to be made with wood instead of metal, and if tied to a fire hydrant or a post near a hydrant, a horse might chew on the wood out of boredom.