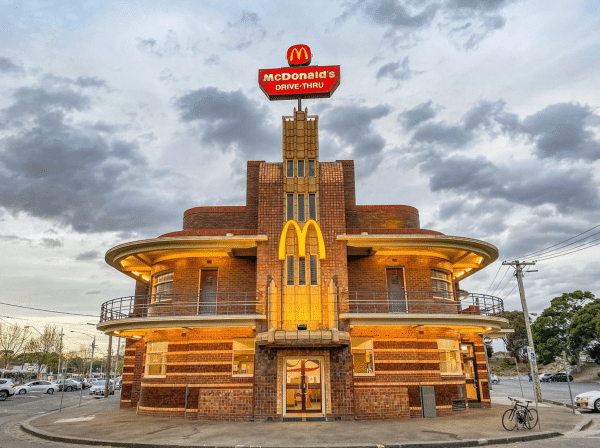 Going to your local McDonald’s is a shared American experience. From the original Golden Arches to the red-topped roof era, and more recently, a wave of sleek and modern buildings, the restaurant with over 99 billion served has had some interesting looks throughout the years. Of the fast-food chain’s nearly forty thousand locations, most look pretty similar, but there are a few unique Mickey D’s that stand out and wow all with their appearances.

From a building-sized Happy Meal to ski resorts and a former bank, these are some of the strangest, most unique McDonald’s locations around the world.

Location: Roswell, New Mexico (where else??)

Ever since that fateful, suspected 1947 UFO sighting, Roswell, New Mexico, has made it its mission to be all things alien-themed. It should come as no surprise then that the city has a McDonald’s shaped like a flying saucer, with Ronald McDonald in a spacesuit and the extraterrestrial theme displayed throughout.

The One With a Ski-thru Instead of a Drive-thru

How can you ever go back to normal drive-thrus when this ski-thru exists?! Affectionally known as “McSki,” this McDonald’s location in Lindvallen, Sweden (about 200 miles northwest of Stockholm) has been serving hungry skiers on the slopes since 1996. A mountaintop McDonald’s sounds pretty fun and convenient, especially since you don’t have to take off all your gear or track in snow when craving a Big Mac.

The One in an Old Airplane

You’ve probably bought McDonald’s at the airport before and taken it onto your plane. This is somewhat different because you’ll never actually take off! With a dining area housed in a decommissioned plane from South Pacific Airlines, this is definitely a unique location, and don’t worry; the dining tables are much roomier than those pesky tray tables. Park under a plane wing and enjoy “the World’s Coolest McDonald’s,” which beat out over 34,000 locations for the title.

The One at the Town Hall

Located in a historic Tudor-styled building roughly 10 miles south of Dublin, this Emerald Isle McDonald’s is also home to the city’s town hall. With the upper floors housing chambers for the Bray Town Council, this Mickey D’s has served tourists and Irish customers alike since 1997.

The Giant Happy Meal One

Ready to get nostalgic and whimsical? Then feast your eyes on the former Dallas Happy Meal McDonald’s! Before its remodeling, this location was home to the biggest Happy Meal in the world. We were sad to learn that this playful facade no longer exists, but at least photos like these will preserve it for all time.

The One in a Former Bank

Housed in a former Norwegian bank with massive marble columns, this particular McDonald’s turned out to be an unintentionally tongue-in-cheek location. The grandiose bank may have closed, and the dramatic front doors are only for show, yet in the end, the McDonald’s Corporation has handled more money than this bank ever did.

The One With a Gorgeous Riverside View

Simple and elegant, what truly makes this McDonald’s location stand out is its breathtaking scenery. From the calm, reflective river to the picturesque mountains, this restaurant radiates absolute serenity. We need to travel to China, order a McCafé from this restaurant, and sit down to write some poetry.

The One in a Colonial Home

What do you do when you’re McDonald’s, and you can’t build a new location in a small town, all because your brand would mess with the local New England aesthetic? You build your restaurant inside an old 1850s mansion, of course!

Once owned by a local sea captain, this former Greek Revival-style home is probably one of the classiest McDonald’s we’ve ever seen. In the dining room, you can even sit by the home’s original fireplace when munching on your McNuggets and fries.

Located in the tiny Eurasian nation’s capital, Tbilisi, this domed McDonald’s isn’t actually an observatory or planetarium. But it definitely looks like one, and it sure is pretty. The Georgian restaurant is also set against a pretty lovely backdrop, with a scenic view of Eastern Europe’s hillsides and greenery.

The Art Deco One

Referred to by many as “The Most Beautiful McDonald’s in the World,” the Melbourne McDonald’s at Clifton Hill is definitely a showstopper. Once home to the popular United Kingdom Hotel, the 1930s structure is a hallmark of sleek and sculpted art deco beauty. Also, in an alternative fictional universe, Jay Gatsby would have absolutely taken Daisy Buchanan here on a date.