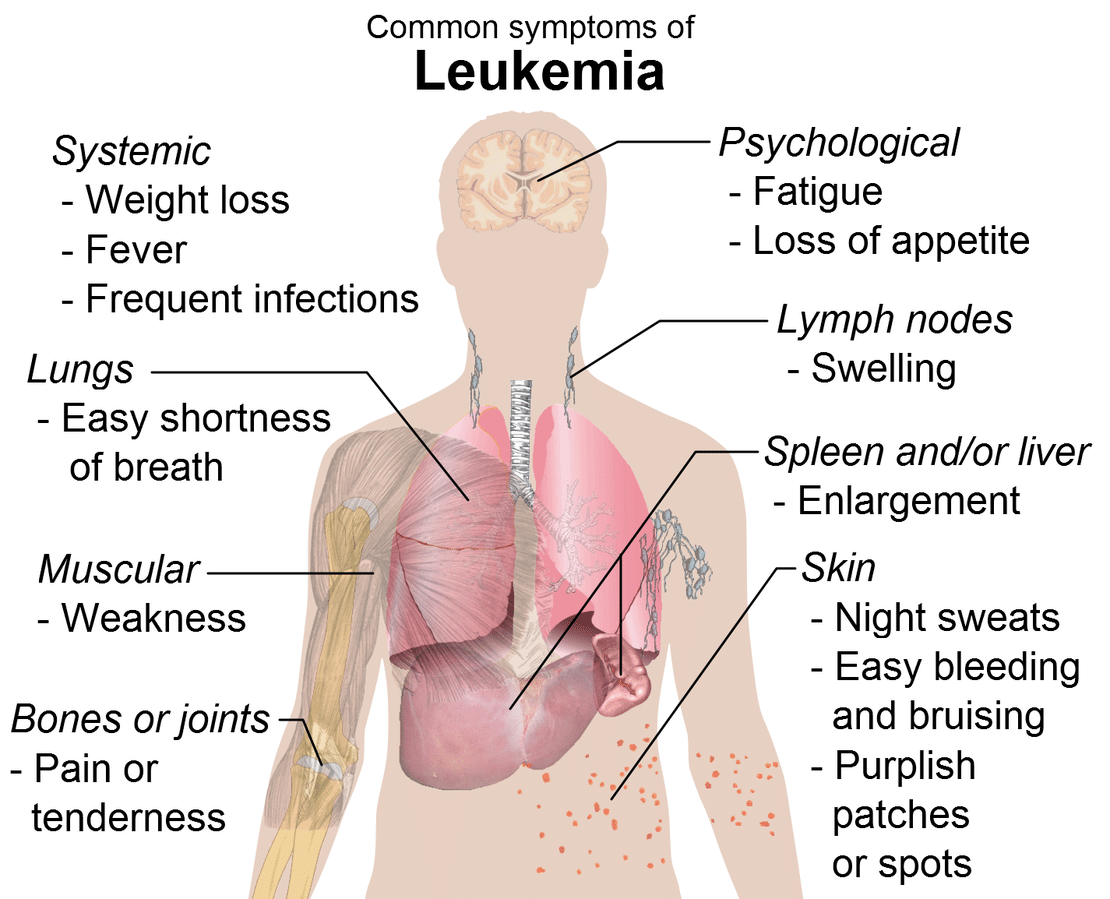 Leukemia is a cancer that affects blood-forming tissues, including the lymphatic tissues and bone marrow. Typically, leukemia affects an individual when white blood cells, which protect the body from pathogens, fail to work accordingly. Bone marrow typically produces white blood cells as the body needs them. This doesn’t happen in leukemia patients, leaving them exposed to diseases. This cancer exists in many forms, and specific types affect children while others are common in adults. Regardless of the type, they all pose significant harm and can be lethal.

Treatment of leukemia varies depending on the type and to the extent it has affected one’s body. However, there are strategies and resources to treat it, especially when discovered early enough.

Different variations of leukemia will have their own specific symptoms. There are, however, some symptoms that are common in most types of this cancer. The following are the typical early symptoms:

Leukemia often goes undiagnosed or misdiagnosed in its early stages because these symptoms are similar to other more common illnesses like the flu. Leukemia is also rarely discovered during tests for other conditions, making it harder to identify it in its formative stages. Therefore, it is recommended that one should go to a medical professional specifically for a leukemia test when the symptoms mentioned above become prominent or persist.

Exposure to certain chemicals – Chemicals, including benzene, increases the risk of leukemia.

Previous cancer treatment – People who have gone through chemotherapies and other forms of cancer treatment, such as radiation therapy, are at a higher risk of suffering from leukemia.

Smoking – Cigarettes can increase the risk of acute myelogenous leukemia.

In some cases, doctors may find leukemia through routine blood tests and patients may be subjected to other tests to confirm the findings. Standard diagnostic tests include: physical exams, which involve the doctor checking for physical manifestations of leukemia; the doctor can check for pale skins and swollen lymph nodes; also common are bone marrow tests, where a sample of bone marrow is tested for leukemia cells. Test may also determine the mode of treatment suitable for a specific patient. Medical professionals can also conduct blood tests to check for abnormal production of white blood cells and platelets. Abnormal cells indicate that the patient is likely to have leukemia, and further tests are conducted to confirm the results.

Bendeka – Bendeka (Bendamustine) is a chemotherapy drug that treats different types of cancer, including leukemia. Usually, a dosage depends on one’s body size and response to medication. Blood tests prior to taking this medication can help determine the correct dosage. Additionally, patients can use this drug in conjunction with other medications, including fever reducers and corticosteroids, to reduce unwanted side effects. Patients should inform their physicians if they have any allergies to avoid complications, however.

This medication is available in pharmaceutical outlets, so its price varies. It sells for $2589.02 in Wal-Mart, $2679.71 in Walgreens, and $2590.15 is a standard price in many local pharmacies. Discounts may be available at specific outlets.

Bosulif – The company says that Bosulif treats chronic myelogenous leukemia by slowing or stopping the growth of the cancerous cells. The medication is more effective when taken with food and used as prescribed by the physician. Also, one should not use this drug with medication that reduces stomach acids, as they inhibit the absorption of the drug. Efficiency depends on one’s reaction to the medication and body size.

Sprycel – Sprycel treats chronic myeloid leukemia and acute lymphoblastic leukemia by inhibiting cell growth, according to the company. A dosage is determined by response to treatment, current medication, and lab tests. Additionally, doctors advise those taking this drug to refrain from taking antacids, such as calcium carbonate and aluminum hydroxide, two hours before or after taking Sprycel as they inhibit proper absorption of the drug. Pregnant women should also avoid using handling it any way whatsoever, as it can harm the unborn baby.