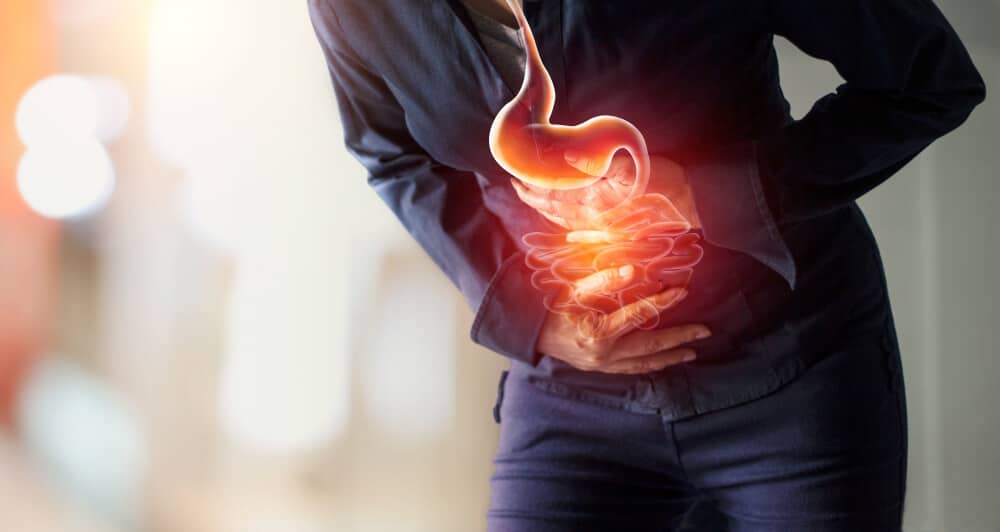 Stomach pain can range from mild to severe, and it’s usually pretty uncomfortable. It can also be caused by many different things, which is why it’s important to identify the cause of your stomach pain and treat the underlying condition, rather than the symptoms alone.

Here are ten of the most common causes of stomach pain, along with steps you can take to relieve your discomfort and improve your overall health.

Food intolerance deals with the digestive tract, rather than the immune system (as is the case with allergies). When the digestive tract is unable to break down a certain food properly, it can lead to a host of symptoms including pain.

Currently it is believed that intolerance is actually caused by an enzyme deficiency. Specifically, experts believe that there aren’t enough specific enzymes in the digestive system to break down certain foods. Importantly, enzymes are crucial to the digestive process.

Of course, sometimes stomach pain isn’t the result of something we ate. Instead, it could be due to conditions caused by bacteria…

Ulcers are holes that form along the upper part of the small intestine (duodenum) as well as in the stomach. In more rare cases, ulcers may form in the esophagus. Doctors have found that ulcers are usually caused by either H. pylori bacteria or through long-term use of nonsteroidal anti-inflammatory drugs (NSAIDs).

How Does Ulcers Cause Stomach Pain? The stomach pain associated with an ulcer is often caused by stomach acid seeping through the holes in the stomach lining. This seepage causes a burning sensation, usually in the mid-abdomen.

Constipation is when you experience less frequent bowel movements than normal (less than 3 per week) or it is more difficult to have those bowel movements. Much like gas, constipation causes distention (bloating, swelling) of the digestive tract. Further, constipation can cause movement through the tract to slow and stop, which also causes stomach pain. You should seek medical attention if you have not had a bowel movement in 3 days or more.

Occasionally constipation will be symptomatic of something else happening in the body. These root causes can range from reactions to certain medications to the onset of some neurological conditions (like Parkinson’s disease), all of which may prevent the bowel muscles from working. A qualified medical professional will help you determine what is happening.

Gastroenteritis, or stomach flu or stomach virus, is the general medical term for infections of the digestive tract. Gastric infections are caused by a number of viruses and bacteria. Unless the specific bacteria is caused by tainted food (food poisoning), it falls into the realm of gastroenteritis.

How Does Gastroenteritis Cause Stomach Pain?

This condition causes stomach pain in a number of ways.

Gastroenteritis or Something Else?

Now, gastroenteritis is caused by a specific virus or bacteria ingested through contaminated food and water or by coming into contact with contaminated surfaces. The following condition can cause similar symptoms, although it is caused specifically from eating spoiled foods…

Everyone has heard the term food poisoning and knows it can be extremely uncomfortable. Most people have even experienced it at one time or another, but may not have a good idea of what this condition actually is. Food poisoning is simply a bacterial infection of the digestive tract. How do the bacteria enter the body? From something you eat or drink.

Certain foods grow specific bacteria, parasites, or viruses when not stored or refrigerated properly. Contaminated foods can also lead to poisoning, including foods contaminated with fecal matter. Eating spoiled and/or contaminated food can bring dangerous substances, bacteria, and even viruses into the body.

Which Foods Commonly Cause Food Poisoning?

Spoiled foods that commonly cause food poisoning include:

Which Bacteria Commonly Cause Food Poisoning?

The bacteria commonly at fault for poisoning include:

Did you know that most people will toot about 20 times a day? While gas is a normal bodily function, it can be embarrassing. In extreme cases, it can also be painful. Digestive gas is exactly what it sounds like: gases produced during the normal digestive process. When there is a buildup of gas, it needs to be released. This release typically occurs as burping or flatulence.

Gas is a normal side effect of the digestive process. Specifically, digestion requires that bacteria ferment carbohydrates in your large intestine. In turn, this process produces hydrogen, carbon dioxide, and methane. This gas is often released through the anus.

How Does Gas Cause Stomach Pain?

Most people think of anaphylaxis when it comes to food allergies, which can certainly be dangerous. However, the body has many different ways of telling you when something is wrong, and stomach pain is one of those ways.

Food allergies happen when the immune system has an unnecessary response to a food substance. In other words, the immune system mounts an attack against food as if it is a dangerous foreign invader (like disease-causing bacteria).

What Food Allergies are Common?

Most food allergies are caused by one of eight foods:

How Do Food Allergies Cause Stomach Pain?

When histamine (one of the chemicals produced in an allergic reaction) is released in the gut, it causes stomach pain, cramps, and diarrhea.

Hernias are something most people have heard of and associate with strenuous activity. A hernia is when an organ starts to squeeze through a weak point in the muscle tissue. The result? A “bulging out” of tissue.

Where Do Hernias Commonly Occur?

The most common areas for hernias to occur are in the:

There are many causes of hernias, the most common of which include:

How Do Hernias Cause Stomach Pain?

When a hernia causes pain, it is usually because it has started strangulating the organ involved. This situation is an emergency, as it can cause significant organ damage if left untreated.

The pain associated with appendicitis comes from inflammation as well as swelling produced by the accumulation of pus. In severe cases where the appendix has burst, you may experience severe abdominal pain caused by infection spreading throughout the abdomen.

When to be Concerned

Consult your doctor if you think you may have diverticulitis. Treatment may range from rest to antibiotics to a modified diet to even surgical intervention in more severe cases.

Know Your Body & Pay Attention to the Messages It Sends You

As you can see, there are many causes of stomach pain, and treatment will vary based on these causes.

The best way to deal with stomach pain?

The best way you can deal with stomach pain? Pay attention to what you have experienced in the past and what may be new. In other words, know your body. Note when something unusual happens, and if this unusual occurrence is chronic (long term) or acute (short term) as well as if it results in sharp pain or a dull ache.

Never dismiss a new type of stomach pain as meaningless. If you are unsure if what is going on is unusual or severe, it’s always best to play it safe and see a healthcare professional.

Generally, you should give your pain more attention if it lasts more than a day or if it worsens. If you are experiencing other symptoms along with stomach pain, keep an eye on it. See your doctor if you do not start to improve within a day or two.

What Symptoms Indicate a Medical Emergency?

You should seek immediate medical attention if you experience any of the following:

(This list is not complete. In other words, these symptoms are just a few that may indicate a severe problem.)